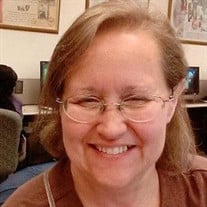 Elizabethe Mariana DeTomasi, born Sherry Grannis, passed away peacefully in her sleep, January 10, 2017. She was born September 18, 1959 in Hermosa Beach, California to Donald Manning Grannis and ReNae DeTomasi Grannis. She was the first grandchild to Dorotha Davidson DeTomasi and Fred DeTomasi and was adored by her whole family. Elizabethe spent her childhood in the water. She was born and raised near the ocean where she learned to love boating, surfing and water skiing. Later, her family moved inland and she was able to get a horse, Sno, whom she loved and talked about even as an adult. She spent her days playing with her younger sister and only sibling, Tonina and was described by her mother as being a tom-boy who loved beautiful things, such as lace and the color pink. Elizabethe joined the LDS church as a teenager and was a faithful member. She served a full-time mission to Denver, Colorado from 1983 to 1984. She was an excellent servant of the Lord and touched many lives and made many lifelong friends during her time in Colorado. Elizabethe will be greatly missed by so many friends and family members who loved and adored her. Still, we are happy she was able to put this mortality behind her and return to her Father in Heaven in peace and love. Elizabethe is survived by her sister Tonina DeTomasi, nephew Dane Ariimoana Krackowizer, Australia, many cousins and friends throughout California and Utah. She is preceded in death by her Mother, ReNae DeTomasi Grannis, Father, Donald Grannis and both sets of grandparents. A viewing will be held Saturday, January 21, 2017 from 10-11am at the Serenity Funeral Home followed by a memorial service at 11:00am at the same location, Serenity Funeral Home, 12278 S. Lone Peak Pkwy, Draper, Utah. Interment will take place at the Provo City Cemetery. Please share memories and condolences at serenityfhs.com

The family of Elizabethe Mariana De Tomasi created this Life Tributes page to make it easy to share your memories.