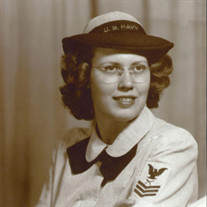 Ella Marie (Ellaree) Christensen Howard passed away peacefully on Wednesday, March 11, 2020 at the age of 95. She was living at Spring Gardens in Lindon UT, and spent her last few years and days bathed in her family's love and care. Ellaree was born in Shelley ID on Sept 13, 1924, and spent the bulk of her childhood in Idaho Falls ID. She became a proficient pianist and much sought-after accompanist at a young age, and also played in the high school band. It was in the band that she met fellow clarinetist Bill Howard. They became engaged their senior year of high school, but the attack on Pearl Harbor put wedding plans on hold. After a year of college, Ellaree enlisted in the Navy and proudly served her country in the WAVES at Washington D.C. (She participated in the Utah Honor Flight program for veterans in 2015.) Bill served in Europe in the Army during WWII. They married August 21, 1946, four years after becoming engaged. Four children were born in the ensuing years: Christine (Raymond Smith--deceased) Central Point OR; Norman, Albuquerque NM; Dawn Marie (Richard Brock), Clarks Summit PA; and Marguerite/Margy (Lee Chestnut), Lindon UT. Ellaree and Bill lived in many locations during their 58 years of marriage, including Moscow ID (University of Idaho); Columbia Falls MT (while building the Hungry Horse Dam near Glacier Park); Alexandria VA (serving in the Korean War); Missoula MT; Kalispell MT; Colville WA; and Orem UT. They especially loved Montana. They also served two missions for their church (The Church of Jesus Christ of Latter-day Saints) in Tennessee and Oklahoma in the 1980’s. Road trips were varied and many when the children were at home. When Bill retired from the U.S. Forest Service, they began traveling internationally, eventually visiting over 100 countries, sometimes for months at a time. Most of their travels were independently planned and executed, and included a fair amount of adventure and traveling/living among the natives. Worlds' fairs/expos, national parks, and libraries were among their favorites places to visit. They also spent months on several occasions helping family and/or friends build homes, and serving as family caregivers as needed. When they were home in Orem, they became involved with Elderquest, an adult education program. They dearly loved the educational opportunities it provided and the friendships it spawned. Ellaree served one year as president of the organization, and also taught Shakespeare many years for them. She loved BYU Education Week, and attended every year until recently (over 50 years). She was a serious student of geography, history, and the arts. Specifically, she loved Shakespeare and belonged to a local study club for about 30 years. She could recite long segments of his writings, and also enjoyed reciting classical poems she had memorized. She was also an avid sports fan of the Utah Jazz and BYU sports. She was dedicated to daily exercise on her own and in organized classes (100% attendance!) In short, Ellaree loved and appreciated beauty in all forms: flowers and gardens, art, opera, classical music, dance (all forms, including ice skating), poetry, etc. She loved growing and caring for flowers, especially statuesque gladiolas and irises. (She herself was six feet tall in her prime.) Ellaree received a Home Economics degree (clothing construction and design) from the University of Idaho. (She enjoyed wearing bright colors throughout her life--purple especially--and sparkly clothes, and delighted in having everything perfectly coordinated--socks, jewelry, scarves, etc.) Later, she received an English degree from the University of Montana. As a voracious reader and follower of national and international news, she never stopped learning and yearning. Although she was well-educated and highly cultured, Ellaree was truly classless and found commonalities with all people wherever she lived or traveled. At one time, she was employed as a social worker on a Native American reservation and showed great empathy and love towards the people she served. Ellaree volunteered in many capacities in her church, and also in every community where she lived, most recently at the Orem Library. Earlier, Ellaree was a long-time leader in the Girl Scouts and PTA organizations. She taught piano lessons free of charge to countless students over the years, including some of her own children and grandchildren. She was devoted to the Church, and watched "Music and the Spoken Word" weekly without fail. A favorite assignment in the church was teaching Cultural Refinement lessons in the Relief Society organization. Her family grew through the years and was truly her greatest joy and source of comfort. In addition to her children, she is survived by 16 grandchildren and more than 30 great-grandchildren. In August 2019, fifty-five members of the family gathered in southern Utah to celebrate Ellaree's 95th birthday in fine fashion. She was the beloved and revered "Purple Matriarch." In addition to her descendants, Ellaree is also survived by a sister, Ruth Wasden of SLC, UT, and a brother, Richard Christensen of Danville CA. Four other siblings preceded her in death. Ellaree truly was a remarkable woman, mother, sister, and friend. God be thanked for the gift of her wonderful life. Till we meet again... There will be an outdoor memorial for Ellaree Howard on Saturday, June 27th at 10:00 am. It will be at Orchard Park -- 755 E 950 N in Orem. Please bring your own chairs and masks if you would like. There are some picnic tables available. We will practice social distancing. The service is for family and close friends.

Ella Marie (Ellaree) Christensen Howard passed away peacefully on Wednesday, March 11, 2020 at the age of 95. She was living at Spring Gardens in Lindon UT, and spent her last few years and days bathed in her family's love and care. Ellaree... View Obituary & Service Information

The family of Ella Marie (Ellaree) Christensen Howard created this Life Tributes page to make it easy to share your memories.