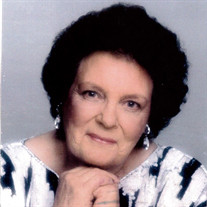 Emma Gerber Cook, 93, of Washington, Utah died Monday January 19, 2015 at her home surrounded by many of her posterity. She enjoyed the blessing of 14 children, 90 grandchildren, 177 great grandchildren and 4 great great grandchildren. She was born 22 May 1921 in Winnipeg, Manitoba, Canada. She was the sixth of eleven children born to Robert and Lina Moser Gerber who had emigrated from Bern, Switzerland. Her family later moved to Calgary, Alberta, Canada where her family converted to the LDS church. Her mother waited until after Emma’s birth to be baptized. She shared how her parents always took very good care of the missionaries. She met a young missionary, Elder Cook, and the rest would become Family History. Glenn Franklin Cook married Emma Gerber in the Logan, Utah temple May 9, 1944. From the home place in Firth, where they farmed for many years, they moved to Shelley for a short time then had the opportunity to move to Overton, Nevada to run the Overton Motel. She worked hard for 25 years from 1977 until 2002 when she finally retired at the young age of 81. She moved to her current home where she was able to be close to family and free to enjoy their company. She was known for her compassion and often made quilts and other gifts for grandchildren or anyone who needed help. Emma is survived by her children Anna Ruth (Larry) Kohler, Paul (P. J.) Cook, Helen (Bill) Turpin, Cathy (Claine) Haggard, Jerry (Claudia) Cook, John (Karen) Cook of Idaho; Pearl Flint Staggie of Arizona, Vickie Bischoff, Candee (Shane) Robbins, Brenda (David) Shettel of Utah; Vivian (Bob) Lewis, Valene Atwood of Nevada, and Lori (Mike) Stephenson of California. She is also survived by her daughter-in-law Debbie Cook, two of her siblings and her numerous posterity. Emma was preceded in death by her parents, husband, son Glenn Frank Cook, son-in-law Dennis Atwood, grandson Jonathon Lewis, and eight of her siblings. A viewing from 11:00 AM-12:45 PM will be held Saturday, January 24, 2015 at the Basalt Idaho Stake Center, 823 North 675 East, Basalt ID, with the funeral following at 1:00 PM. Burial will be in the Goshen, Idaho cemetery. Funeral arrangements have been provided by Serenity Mortuary of St. George, Utah.

The family of Emma Gerber Cook created this Life Tributes page to make it easy to share your memories.