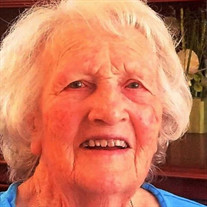 Emma Broadbent Dexter, 91, passed away on August 19, 2021 in Pleasant Grove, Utah. She was born November 27, 1929 in Snowflake, Arizona to Hyrum and Lorana Smith Broadbent. She married Edward Keith Dexter in the Mesa, Arizona LDS Temple, on December 21, 1953. Emma did not have the ear of those in government or industry. She made no monumental decisions that affected thousands or even hundreds. She amassed no enviable fortune or fame that made her known to others. The world did not pause at her arrival or her departure, just another soul amongst millions that come and go every day. But for those whose lives she touched, she had an impact that cannot be measured or quantified. From her humble beginnings, growing up in the midst of the Great Depression, she learned the value of hard work, the rewards of frugality and sacrifice, the importance of family, and how to find happiness in any situation. She always said that as a child, she never felt poor, recognizing that her family had enough and that they looked out for each other. While undoubtedly becoming more conscious of her family’s economic disparity as she matured, it kindled a fierce pride instead of shame or regret. Her upbringing also instilled an undying sense of fairness in life for all people. As a young woman growing up during the Second World War, she developed a love for her country and an acute recognition of the Hand of God in forming and preserving the nation. This also increased her awareness of the multitudes of others who were not fortunate enough to live in such a blessed nation, instilling gratitude for what she recognized as the abundance which she enjoyed. She served as a missionary for the Church of Jesus Christ of Latter-day Saints, being called to the Southwest Indian Mission. Her experiences in sharing her faith and serving others would have a lasting impact on her life. She recognized the value of higher education, in spite of the fact that she never finished her degree. Meeting her future husband while she attended Brigham Young University, she left school and started a family of her own when they married. Their first 15 years were spent in Fontana, California. It was an especially happy time for the family, positively impacting the community and making friends that would last her whole life. It could be said that she hit her stride during this time, firmly establishing her role as the matriarch of the household. Many family traditions she established in these early years are still followed to this day, including hiking, camping, and exploring different cultures. After a career change for her husband, the family moved to Salt Lake City, then later to Orem, Utah, where she was to spend the majority of her years. She continued to have an impact on her community, her church congregation, and even started a business of her own. When her youngest child left for service on an LDS mission, she and her husband fulfilled a long-held goal of serving together on a mission themselves, a goal they repeated 3 more times. Learning Spanish in her later years in anticipation of this, she and her husband found great joy in serving the people of Central and South America. In between the missions, she didn’t let her age keep her from sharing her love of the outdoors and sense of adventure with her children and grandchildren. She cherished family gatherings, insisting on preserving the connections amongst the ever-growing members in spite of physical distance between them as they moved out and started families of their own. The only thing that slowed her down, even in her later years, was an unfortunate encounter with a ladder of malicious intent. But instead of bemoaning any mistakes she had made, she remained focused on continuing her relationships with family and friends to the best of her ability. To the last, her family remained of paramount importance in her life. Above all, her testimony of the Gospel of Jesus Christ was a torch that she gladly carried throughout her years, shaping her life by its divine light. All these numerous qualities she passed on to her children and successive generations, a ripple in the pond of humanity that continues to expand even as she is no longer present to witness it. She is survived by her children Cherilyn (Joel), Lorana (Kerry), Alan (Verlene), Dean (Meredith), Neal (Terri), and Kevin (Vanessa); 33 grandchildren; and 38 great-grandchildren. She was preceded in death by her husband, Keith; her parents, Hyrum and Lorana; and her siblings Francis, Smith, Karna, and Jesse. There will be a grave-side service at the Orem City Cemetery, 1520 North, 800 East, on Friday, August 27th, at 10:00 am. For those unable to attend at that time, a later memorial will be held on October 16th, at 10:00 am, at the LDS Suncrest Stake building, 95 North 600 West in Orem, Utah. Emma made numerous friends in her many years and had a very large extended family. If you would like to share a particularly poignant, important, or memorable moment of her just being herself, please share those memories and condolences at www.serenityfhs.com.

Emma Broadbent Dexter, 91, passed away on August 19, 2021 in Pleasant Grove, Utah. She was born November 27, 1929 in Snowflake, Arizona to Hyrum and Lorana Smith Broadbent. She married Edward Keith Dexter in the Mesa, Arizona LDS Temple, on... View Obituary & Service Information

The family of Emma Broadbent Dexter created this Life Tributes page to make it easy to share your memories.