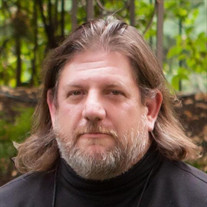 Eric died of liver failure at Care Source Hospice on his 45th birthday. He is survived by his parents, Wayne and Deween Durrant; siblings: Valerie Lynne (Josh Bayer), Rockville MD, Michael Durrant (Kari) of Pacific Grove Ca, Cheryl Fillmore (Lincoln) of South Jordan, Ut, nephews Alex Bayer and Nicholas Fillmore; aunts, uncles, and cousins. Preceded in death by his grandparents: Wayne and Phoebe Durrant, Winnie Burton and Dewey Canning; cousins Jimmy and Tony Durrant. Eric grew up in Salt Lake and Sandy where he attended local schools. Towards the end of his life he chose to live in Seattle WA, Phoenix AZ, and Mesquite, NV. Off and on he worked at his uncle’s Danish Crown Bakery and many of the Pizzerias in the valley. Saying he was born with excess energy is an understatement. He kept everybody running. As a youth he was an All Star baseball player and an avid Boy Scout. He was artistic, creative, fun-loving, always busy, and had a sensitive heart. Later, Eric turned to music and composing original songs. He played the guitar, keyboard, and electric drums. His passion was to record each instrument on his computer, then sing his original lyrics, and synchronize them all together making a complete piece. He wrote and recorded hundreds of songs on CD’s--many of which he gave away. Using a dremel tool he carved intricate designs on the backs of guitars and other wooden objects. He was a master of thrift store shopping. He assembled his own style of second-hand outfits and filled his home with unique and unusual décor. He had an eye for quirky treasures. Unfortunately, Eric was burdened with many challenges in life. In adolescence and throughout his life after that, drugs became his muse; paranoid delusions and bipolar became his nemesis; fear became his frustration; and alcohol became his escape…. finally causing his death. As parents we advocated for and navigated all the help society could offer him to cope and overcome his difficulties. We are grateful for and extend our deepest appreciation to family members, neighbors, friends, counselors, treatment programs, courts, and medical personnel for their help, concern, love, expertise, and support given to Eric and to us throughout this long, hard journey. Bless you! We believe Eric is now at peace and in the loving arms of his Heavenly Father and others who have gone before. In lieu of flowers please make a donation to a charity of your choice in Eric's memory. A casual gathering will be held in his honor on Sunday, August 23, 6:00 to 8:00 pm, at the Willow Creek Stake Pavilion, (behind the church) 2350 E. Creek Road Sandy, Utah

The family of Eric Wayne "Rico" Durrant created this Life Tributes page to make it easy to share your memories.

Eric died of liver failure at Care Source Hospice on his 45th...