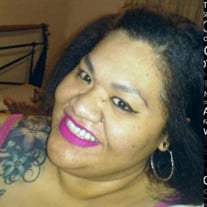 Esther Rachel Maumasi, 30 years old, returned home to her father in heaven on April 19, 2016 in Taylorsville, UT. She was born March 8, 1986 in Dallas TX to Raymond Lei Maumasi and Sita KamaritaTaateo Maumasi. Esther the third oldest of four daughters, was not only glamorous but very gifted. In just a span of thirty short years Esther shared many of her talents. From poetry writing, masseuse, cooking and playing the drums. Her greatest gift she shared was her love. Anyone who encountered paths with Esther always felt inspired to make a difference in the world. Her number one priority is always family. She focused on family over everything. We know the people she will miss the most will be her "babies" Daniel, Sita & her namesake Maybel-Faalataina Rachel, whom she often referred to as her saving graces. Esther is survived by: Her parents Raymond & Sita Maumasi, her sisters Ana Manila (Laulu Matavaatele, Daniel, Maybel-Faalataina), Mary Maumasi (Mauricio & Sita-Maria), ace Imelda Caroline Maumasi, aunties, uncles, a great deal of cousins and many many friends. Esther is preceded in death by: Raymond Jr Maumasi, Scot Sialafau, Henry Taufui, Saumonatoto Maumasi, and Davidicus Jamison Taufui. Esther's service information: Tuesday, April 26, 2016 at the Taylorsville 1st Ward 4845 S Woodhaven Dr (1365 W), Taylorsville UT 84123. Family viewing service from 9am - 10:30am. Bishop Funeral Service from 11am – 12pm. Esther's final resting place will be Crescent Cemetery 11105 S. State Street, Sandy UT 84123. Services are under the direction of Peni Malohifo'ou of Serenity Funeral Home We would like to thank all of our families, the Taylorsville 1st Ward, Taipan Trading, Serenity Funeral Home and many friends for helping us at this very difficult time. Please share memories and condolences at www.serenityfhs.com

The family of Esther Rachel Maumasi created this Life Tributes page to make it easy to share your memories.