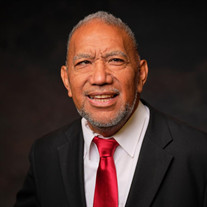 FELETI MOIMOI FAMILY SERVICES Time: Jan 15, 2022 08:30 AM Mountain Time (US and Canada) Join Zoom Meeting https://us02web.zoom.us/j/8017509016?pwd=cE9XWjI1RnJhc1BPUzVsb0V2TWFmdz09 Meeting ID: 801 750 9016 Passcode: SERENITY Feleti “Fred” Moimoi, was born to his earthly parents Otani & Pilimilose Moimoi on October 26, 1959, in the small but humble village of Nuku’alofa, Tonga. Fred embodied the true and selfless love of God, which was why he was loved by so many. Fred was called back to his Heavenly Father on December 31, 2021 to prepare him and his family's mansion on high. Feleti was a man of many talents & hobbies that he loved to share with everyone he met. One day he could be fixing a car engine with his bare hands, and the next playing along with his favorite “oldie” tune on the bass, guitar, drums, and a few other musical instruments that he had acquired the skill of in his time here on earth. Fred loved service, he gave everything and anything to his work. He was employed as a Funeral Counselor for Serenity Funeral Home for a few years and he was always doing what he could for those he came across within his workplace and outside of. After traveling from the islands to live in Canada and the U.S. Fred was a part of a Polynesian group with family members and friends. With that opportunity he traveled far and wide across all 50 states, many parts of Canada, and different countries where he shared his talents of dancing and playing music in a band. Fred accomplished a lot in his life, but if you were to ask him while he was here one of his greatest accomplishments in all his days he would tell you it was his marriage to his beautiful wife, Tu’umafua Mapuolesega Moimoi. He met his wife while performing and traveling the world and he continued that on within his own legacy with his wife and children. Feleti is survived by his wife Tu’umafua, children – Lily Ngawaka, Emaleti Rosie, Feleti Stalin Jr. (Masina Maumau), Haini MichaelJets (Saili Moungaloa), Gordon Folaumoeloa, Annaletta Fuainga, & Saovale Silomiga Ginger & his grandchildren – Nia, Kime, Celeste, Sione, Nephi, MoroniFeleti, Hyrum, Katerina, Angileenaliliana, Otani, & Baby Haini. Fred was reunited with his dearly departed daughter, Leah Kathryn and many other family members who embraced his return. In addition to his surviving kin, he and Tu’u shared their love and opened their home to so many. Feleti was a blessing here on earth who touched so many lives and his legacy will live on through family and all those who knew him. Funeral Services will be held on Saturday, January 15, 2022 at: The Church of Jesus Christ of Latter-day Saints 200 N Center Street Lehi, UT 84043 VIewing: 8-10 a.m. Family Program: 10-12 p.m. BIshop's Program: 12:30-1:30 p.m. Feleti’s burial services will follow at 2:00 p.m. at Lehi City Cemetery located at: 1525 N 600 E St, Lehi, UT

The family of Feleti Moimoi created this Life Tributes page to make it easy to share your memories.