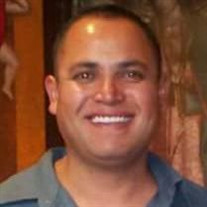 Returned home into the arms of Heavenly Father on April 24th, 2015 in Salt Lake City, Utah. Fernando was born on June 27th, 1982 in San Miguel de Allende, Guanajuato, Mexico to Toribio Suaste Camacho and Maria Ramirez. He married Dolores “Petra” Gallegos on May 28th, 2011 at St. Francis Xavier Catholic Parish. Fernando was the life of the Party to all who knew him. Fernando is survived by his wife Petra, his children Fernando Jr “monkey”, Elias Cruz “honey” Suaste, Mario, Vanessa, Damian Valencia, y Gabriel Vigil, his father Toribio Suaste Camacho. Brothers: Toribio (Marilu), Melchor (Katie), Rigo, Gustavo (Abigail), Pedro (Liliana). Sisters: Berenice (Juan), Jaqueline (Noel) Arcos. Godson: Nathan Suaste. He is reunited in death by his mother Maria Ramirez, two angels lost before birth, grandparents, aunts, uncles and cousins. He was always eager to learn, accomplish and conquer anything, and everything he possibly could. There was not anything he could not do, or learn and too humble to ever take credit. He worked many years as a landscaper, alongside his brothers and friends. Recently he was proud to become an employee of Piccus Construction Co. where he felt was time to learn yet another trade, as he mastered many others. Fernando was always the first to offer his hands and time to any one, for anything and never expected anything in return. He was a righteous man who loved passionately and stubborn a rock. He had an angelical smile, as bright as the sun. He will be deeply missed by all lucky enough to cross his path. He loved a good time “kickin” having a beer at the snop with family and friends. He was a lover of all music, but most of all spending time with the loves of his life, being to his children, wife, father whom he loved and adored with all his heart, and spent the end of his days. God, family, hard work and responsibilities were his priorities in life. Family would like to thank Dr. Hebrew and the NICU staff at the University of Utah Hospital for all of their compassion, caring and empathy. Funeral Services will be Tuesday April 28th, 2015 at St. Francis Xavier Catholic Parish located at 4501 South 5215 West in Kearns, UT 84118. Rosary will begin at 5:00 P.M. and the Funeral Mass at 6:00 P.M. Family condolences can be shared at www.serenityfhs.com

The family of Fernando Suaste-Ramirez created this Life Tributes page to make it easy to share your memories.

Returned home into the arms of Heavenly Father on April 24th,...