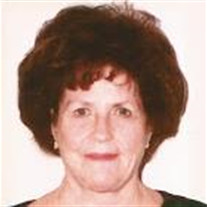 Flora Sparrow Ogan 1928-2015 Flora Sparrow Ogan died at home in Roy, Utah, January 16, 2015. She lead a fulfilling life of love for family, dedication to community, and devotion to a 40 year career in journalism at the Standard Examiner. Born May 30, 1928, in Ogden, Utah, the only daughter of H.D. and Cora Hall Sparrow, both deceased. She grew up in Ogden 9th Ward area with three brothers who preceded her in death, H. Duell Sparrow, Clyde Dee Sparrow, and Clair Hall Sparrow. She attended Washington Elementary and Washington Junior High and graduated from Ogden High school where she was a member of many groups, including Carpe Diem. She enrolled at Weber Jr. College. Flora married, later divorced, A. W. “Larry” Ogan (deceased). She is survived by children Larry C. Ogan (Sante Fe, NM), Cheryl Kelstrom Smith (Roy), and Craig S. Ogan (Salt Lake City), seven grandchildren and 11 great-grandchildren. She moved to Roy in 1952 when her father opened H. D. Sparrow Company, predecessor to Sparrow's Home Furnishings, still operating in Roy. She was secretary and bookkeeper at the store. She was secretary of the Roy Area Chamber of Commerce and a founder of the Jaycees Roy Chapter, member Utah Chapter, American Air Force Association. Flora began reporting Roy, West Weber and North Davis counties for the Standard-Examiner in 1955; became a full time reporter In 1960. Starting in 1969, she was City Editor serving 11 years and Associate Editor and Editorial Page Editor 16 years. A member of the National Association of Editorial Writers, she co-chaired of the 1986 National Convention held in Salt Lake City. Her career gave many opportunities for public service. Her office was a stop for politicians and civic leaders, where she used the influence of the newspaper for “civic good”. She was instrumental in promoting among other things: Ogden City and Weber County Government reform, open meeting laws, automobile lemon law, Weber County Fair Ground construction, Downtown Ogden Mall Project, Union Station and 25th Street restoration. She was an advocate for Weber State College in its physical plant expansion and University status in 1991. Flora was the first female chair of the Weber/Ogden Chamber of Commerce Military Affairs Committee and the 1992 and 1995 Base Realignment and Closure (BRAC) community response committees. Flora was a member of the Weber County Olympic Steering Committee for the 2002 bid. and the commission that revised the Utah State District Court System. She served 8 years on the Governor's Utah Judicial Conduct Commission. She served on the Weber County Arena board, the St. Benedict Sisters Foundation and the McKay-Dee Hospital Outreach Committee. She received the 2002 Weber/Ogden Chamber of Commerce Athena Award. After retirement she remained active in the community, most recently helping with publicity for the Lantern House services for the homeless. Funeral service at the Mazer Chapel at the Hill Aerospace Museum (HAFB Roy Gate) at 2:00 PM, January 23, 2015. Flora will be interred in at the Roy City Cemetery. The family will host a “Reception for Remembrance” at the Kiesel Avenue Lounge of the Eccles Conference Center from 5 to 8 that evening. Many thanks to the excellent care Flora received at end-of-life: grandchildren--Anne Cazier, Sean Kelstrom and Katie Ogan; Lina Mantlo (CNA) and Intermountain Hospice. Flora's request was a gift to Weber State University Journalism Department, 3848 Harrison Boulevard, Ogden, UT 84408 or the Lantern House, St. Anne's Center, 137 W. Binford Ave., Ogden, Utah 84401 be made in her name in lieu of flowers.

Flora Sparrow Ogan 1928-2015 Flora Sparrow Ogan died at home in Roy, Utah, January 16, 2015. She lead a fulfilling life of love for family, dedication to community, and devotion to a 40 year career in journalism at the Standard Examiner. Born... View Obituary & Service Information

The family of Flora Sparrow Ogan created this Life Tributes page to make it easy to share your memories.