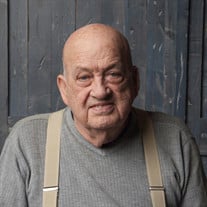 Floyd Nunley loving Husband, Father, Grandfather and Great Grandfather passed away peacefully on May 8, 2019 at his home in Draper, Utah. His dear wife Bertha, his Parents and several Brothers and Sisters preceded him in death. He was born on June 24, 1933 in Salt Lake City to Charles Nunley and Ona Neilson Nunley. Floyd was one of thirteen children and was raised in the Nunley’s home on Siggard Drive in East Millcreek. Floyd had fond memories of growing up on the east bench of Salt Lake City, playing in his father’s and grandfather’s orchard, riding horses and roaming the wide open spaces along the eastern foothills of the Salt Lake Valley. He attended local schools in the Granite School District. Floyd enlisted in the Air Force in May of 1952 serving four years as a Military Policeman with the Strategic Air Command guarding our nations nuclear arsenal. It was during his military service at the Barksdale Airbase that he met the love of his life Bertha Harrell. Floyd and Bertha were married on August 2, 1954 in Ruston, Louisiana. After their marriage and discharge from the military they moved to Salt Lake City where they made their home, raised their four children and enjoyed nearly 50 years together. Floyd was a master carpenter and homebuilder. He worked diligently as a carpenter to provide for his family and eventually started building his own homes. He trained both of his sons in the carpentry trade as well as many other young men including two of his grandsons. Once his family was raised, he and Bertha moved to Whittier California to pursue opportunities in commercial construction where was employed as a superintendent over large projects. They returned home to Utah in 1991 to resume their home building business. Floyd had a tremendous work ethic and worked well into his 70’s as a homebuilder. He enjoyed the construction trade waking early each morning and working hard before eventually deciding to retire in 2007. His four children survive Floyd: son Michael Nunley (Patricia), Whittier, Ca., son Floyd (Butch) Nunley Jr. Draper, daughter Deborah Alexander (Cal) Alpine and daughter Carma Pedersen (Brett), Fairview. He was a very kind, caring and proud Grandfather to his eleven grandchildren and 24 great grandchildren. The family wishes to express their heartfelt thanks to the staff of the Veterans Hospital Administration in Salt Lake City and all of the dedicated Doctors and Nurses who cared for Floyd during his recent decline. In keeping with Floyd’s wishes, graveside services will be held for family and friends at the Camp Williams Veterans Cemetery on Monday May 13th at 1:00 PM. The address for the cemetery is 17111 South Camp Williams Road, Bluffdale, Utah 84065.

Floyd Nunley loving Husband, Father, Grandfather and Great Grandfather passed away peacefully on May 8, 2019 at his home in Draper, Utah. His dear wife Bertha, his Parents and several Brothers and Sisters preceded him in death. He was born... View Obituary & Service Information

The family of Floyd Nunley Sr created this Life Tributes page to make it easy to share your memories.