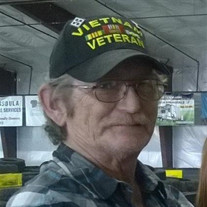 Frank McDonald S.R., 66, of Darby, Montana, passed away on the afternoon of Tuesday, November 22nd 2016 in Salt Lake City, Utah. Frank McDonald S.R., the eldest of 6, was born in St. Louis, MO, to the late Francis and Arnold McDonald. He married his wife of 33 years, Linda Delong of Ballston Spa, NY, on January 2nd 1973. He was a veteran of Vietnam, having served in the Army for 9 years, for which he was awarded the National Defense Service Medal, Vietnam Service Medal with 1 Silver Star, Army Commendation Medal, Republic of Vietnam Medal, Driver Badge, and the Expert (Rifle) Badge. He was stationed at Fort Benning, Georgia, Germany, and Fort Hood, Texas, as well as his two tours in Vietnam. He was a skilled welder and grinder, who worked with pride making NASA space shuttle engine parts for Precision Castparts in Portland, Oregon, the very company his mother, Frances, had retired from. As a leader in The Boy Scouts of America, he found a chance to grow closer to his two sons. He was a volunteer reading tutor with S.M.A.R.T. (Start Making A Reader Today), taking time to sit with young students and share his love of reading. He loved animals of all kinds and showed it by volunteering at the shelter. Going above and beyond, he and Linda took in many rescues over the years. Frank could never turn away any person or animal that needed help, even if he was struggling. His sense of duty was paramount in his life; he was a dedicated father of three and grandfather of six. Spending time with his grandchildren gave him a special sense of joy. Frank carried with him a soul of a survivor, through good and bad, a lesson not lost on his children. Frank is preceded in death by his wife, Linda, whom he lovingly and devotedly cared for during her protracted illness. Frank is survived by daughter Shondell Odegaard of Beaverton, Oregon; son Frank McDonald J.R of Hamilton, Montana; son Andrew McDonald of Thompson Falls, Montana; grand-daughters Marina Odegaard, Amelia Odegaard, Aaliyah McDonald, Marie McDonald; and grand-sons Justin Odegaard, and Aibel McDonald Memorials may be given to the Darby Bread Box, New Life Foursquare of Darby, or Valley Veterans Service Center of Hamilton Funeral services and interment will be held at 2:00 pm, Monday, March 27th 2017 at Western Montana State Veterans Cemetery with Pastor John Yuhas of Darby Foursquare, officiating. A post services reception will follow immediately Information will be available to those attending. The family of Frank McDonald S.R wishes to extend our sincere thanks to the Burn Intensive Care Unit of the University of Utah for their skill and genuine care of our father during his time there.

Frank McDonald S.R., 66, of Darby, Montana, passed away on the afternoon of Tuesday, November 22nd 2016 in Salt Lake City, Utah. Frank McDonald S.R., the eldest of 6, was born in St. Louis, MO, to the late Francis and Arnold McDonald. He... View Obituary & Service Information

The family of Frank McDonald S.R created this Life Tributes page to make it easy to share your memories.