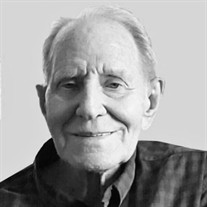 Our precious father and grandfather, Frank Bullock Merryweather, passed away February 25th, 2020 at the age of 90. Frank was born July 11th 1929, to Frank A. and Maude B. Merryweather in Provo Utah, where he lived his younger years until graduating from Provo High. He remained in Provo until joining the National Guard at age 20. Frank was a Korean War Veteran having served as an Army Sergeant from 1950-1953. He met his sweetheart, Joanne Provstgaard, while on furlough from the war, and Frank and Joanne exchanged many love letters while he served overseas before he returned to ask Joanne to be his wife. They were married in the Manti temple on October 9th, 1952. The two had 7 children together that they loved dearly, and worked very hard to provide for, doing odd jobs together on the side while Frank worked at Geneva. They raised their 7 children in Pleasant Grove, Utah. Their family meant everything to them and Frank was always asking about all the kids and grandkids doings and interests whenever he would get visitors. His mind never lost it’s clarity, especially regarding those he loved and he was a great friend to every one of his children. He retired after 30 years of dedicated work, and was then able to spend time doing some things that he really enjoyed: reading, which he loved, fishing with his sons and son-in-law, watching sports on TV, especially football and basketball, and getting some exercise, which he always felt was very important. He was preceded in death by his wife, Joanne, his parents, his brothers Albert, Max, Elmo, & Keith, and his sister Faye Brooks. He is survived by daughter Patricia Allman (Norman), sons Frank J (Rene), David (Janice), Rick (Susan), Brad (Vickie), Jeff (Brenda), Jason (Tammy), and daughter-in-law Tonja Merryweather. Frank and Joanne had 25 grand children and 36 great grandchildren, all of whom loved their Grandma and Grandpa Merryweather like none other! Frank observed and experienced much in his 90 years of life, and was always amazed at how life progressed. The family of Frank would like to express their gratitude to all the physicians, nurses, and aides at Orem Rehab & Skilled Nursing, and the VA hospitals in Orem and Salt Lake City for the wonderful care and love that they gave to our beloved father. Burial services under the care of Serenity Funeral Home of Draper.

Our precious father and grandfather, Frank Bullock Merryweather, passed away February 25th, 2020 at the age of 90. Frank was born July 11th 1929, to Frank A. and Maude B. Merryweather in Provo Utah, where he lived his younger years until... View Obituary & Service Information

The family of Frank Bullock Merryweather created this Life Tributes page to make it easy to share your memories.