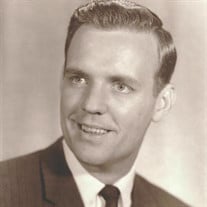 Franklin William (Bill) Roskelley Bill Roskelley passed away peacefully on October 30, 2019 at his home in Riverton, Utah surrounded by family. He was 85 years old. Bill was born at St. Anthony Hospital in Pocatello Idaho on May 24, 1934. He was the fourth of six children born to Joseph Arza Roskelley and Lucille Gertrude Will. He grew up on his family’s acreage located on US Highway 191 (Yellowstone Highway) where he learned the value of hard work. His family moved into town when he was 15 due to the failing health of this mother. He attended Pocatello High School and graduated in 1953. He attended Idaho State University for one year where he met his wife to be, Marylyn Louise Wixom. Bill and Louise were married on August 12, 1954 in Pocatello. They were sealed for time and all eternity on December 30, 1956 in the Idaho Falls Temple. They lived for the next 32 years in Pocatello where they raised a family of six children. Bill was elected to the Pocatello City Council for the term starting in 1968 where he served for nearly 18 years. He also served as Mayor of Pocatello for two years and as the President of the Association of Idaho Cities from 1975-76. In 1986, Bill´s job took him and the family to Denver, Colorado. They then moved to Sandy, Utah in 1990 and later to Riverton in 2004. Bill freely shared his life long love of music with his family and others. Bill learned to love music in his childhood home and he participated in Boys´ Chorus at Pocatello High School and later in the high school choir. He was chosen to represent Pocatello High at District and State competitions as a baritone soloist his junior and senior years. He continued to participate in church choirs and as a soloist his entire adult life. Later in life he taught himself to play the piano. Bill also enjoyed fishing and often took his children to hike the mountains of Eastern Idaho and Wyoming to his favorite fishing spot where he taught each of them to fish. His children fondly remember the many fishing trips with Dad. He was proceeded in death by Louise, his wife of 62 years, on August 22, 2016. He is survived by their six children, Rick Roskelley, Rochelle Williams, John Roskelley, Marianne Rasmussen, Steven Roskelley and Kenneth Roskelley. He is also survived by 17 grandchildren and 14 great grandchildren. Funeral Services will be held at 11:00 AM Friday, November 8, 2019 at the Riverton Third Ward Chapel located at 12998 S 1300 W, Riverton, UT 84065. A viewing will be held the same day from 9:00 to 10:30 AM. Burial services will be at Restlawn Memorial Gardens in Pocatello, Idaho.

Franklin William (Bill) Roskelley Bill Roskelley passed away peacefully on October 30, 2019 at his home in Riverton, Utah surrounded by family. He was 85 years old. Bill was born at St. Anthony Hospital in Pocatello Idaho on May 24, 1934.... View Obituary & Service Information

The family of Franklin William (Bill) Roskelley created this Life Tributes page to make it easy to share your memories.