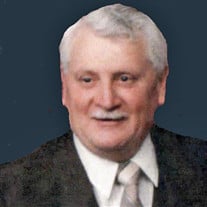 Fred Webb Dupaix, aged 88, passed away peacefully on May 22, 2016 at his home in Sandy, Utah, surrounded by his wife and family. He was born April 16, 1928 in Salt Lake City, UT, to Francis Lorraine and Lucille Agnes Webb Dupaix. He married Joyce Estelle Hargreaves, his high school sweetheart, on November 6, 1946 in the Salt Lake Temple. Fred and Joyce lived and raised their children in Salt Lake City and in Sandy, Utah. Dad attended South High, graduating in 1945, and loved participating in numerous drama and musical events. He adored music and could often be found in the home singing and telling stories to his children. Dad often recounted stories of growing up working with his dad at Dupaix Meat & Grocery in Salt Lake. During the depression, he learned service to others as he and his dad delivered goods to customers and the needy, even if they couldn’t pay for them at the time. He transferred this love of service to his children by involving them in innumerable service projects in the area and at Welfare Square. Dad was an incredibly hard worker. He started his own business – Dupaix Plumbing and Heating – in 1952. He was also a long-term member of the Plumbers Union Local 19. He never shied away from a difficult or challenging job, no matter the type of work, the day, the time or the weather. His children saw and learned from his giving spirit in his work and service. On many occasions, he involved his children in projects for family, friends and neighbors. He enjoyed working on various church related projects including building remodels and on Temple improvement projects. He readily gave his time to benefit others such as when repairs were required at Tracy Wigwam, Cub Country and East Fork of the Bear, all camps sponsored by the local BSA Great Salt Lake Council. Dad was a lifetime Scouter of 76 years and loved leading and working with the boys. He loved teaching the principles of scouting to the youth as a foundation for life. He enjoyed participating in Jamborees, Order of the Arrow activities, and other scouting events with his children, grandchildren, great-grandchildren and many others. He achieved the rank of Eagle Scout as an adult and supported all of his sons, grandsons, great-grandsons, and numerous other young men in reaching the rank of Eagle as well. His service to Scouting was recognized by many awards including receiving BSA’s Silver Beaver award. Dad was a faithful servant of the Lord with a powerful testimony of and an abiding faith in the Savior and was a devoted member of the Church of Jesus Christ of Latter Day Saints. He loved serving in all of the positions he held in the church including providing media and library services for fellow church members for over 25 years. He also loved teaching the young children in the Nursery and especially enjoyed serving in the Jordan River Temple baptistry. He was fond of talking about his service as a stake missionary when he was first married and faithfully supported his children as they served LDS Church missions, served in the military and pursued higher education. Dad is survived by his bride Joyce, his daughter-in-law Cindy, and his children Thomas (Saundra), Joseph (Ann), Harold, Annette (Garth) Limburg, Lorraine (John) Kennedy, Mary, Michael (Denise), Steven (Holly), Richard, Dan (Michelle), Brian (Rebecca) and Geoffrey (Ruth Ann) and his sister, Lucille (Dupaix) Snarr. He has 51 grandchildren and 50 great-grandchildren. He is preceded in death by his parents, Francis and Lucille, children Fred, Laura and Sam and his brother Francis. In lieu of flowers, please make donations to the LDS Humanitarian Fund or to the Friends of Scouting. Funeral services will be held at 11:00 a.m. on Wednesday, June 1, 2016, at the Willow Creek 3rd Ward building at 2400 East Alta Canyon Drive (8600 South) in Sandy, Utah. Viewings will be held Tuesday, May 31, 2016 from 6:00 to 8:00 p.m. and from 9:30 to 10:30 a.m. prior to the services at the same location. Interment at the Salt Lake City Cemetery. Please share memories and condolences at www.serenityfhs.com

Fred Webb Dupaix, aged 88, passed away peacefully on May 22, 2016 at his home in Sandy, Utah, surrounded by his wife and family. He was born April 16, 1928 in Salt Lake City, UT, to Francis Lorraine and Lucille Agnes Webb Dupaix. He married... View Obituary & Service Information

The family of Fred Webb Dupaix created this Life Tributes page to make it easy to share your memories.