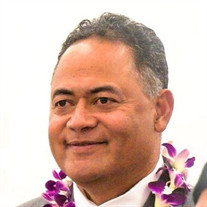 Fred Stone Falepapalangi, 56, peacefully returned to the loving arms of our Heavenly Father on December 8, 2015. He was born on March 19, 1959, in Matahau, Tonga, to Sioeli and Salote Fine'ofa Falepapalangi. Fred married Meliame Latu Angilau and was sealed for all time and eternity in the West Jordan, Utah LDS temple on February 26, 1983. Soon after Fred married his eternal companion, they moved to Nampa, Idaho and began a new life with their growing family. In 1996, Fred relocated his family to West Jordan, Utah where he and his family currently reside. Fred's life was centered around his family and the various leadership callings he held in the LDS church. Although he later became stricken with an illness that took his life, he faithfully continued to take care of his priorities; which was his family and fulfilling church callings. Fred worked for Delta Airlines at the Salt Lake City Airport. He loved his job, co-workers, and cherished many memories and friendships that was created there. Fred will always be remembered by his sense of humor and selfless character. Throughout his life, Fred loved and served others unconditionally with a legacy that continues to live on. Survived by his beloved wife, Meliame Latu Falepapalangi; his mother, Salote Fine'ofa Falepapalangi; his children, 'Ofa Patricia Tavake (Tomasi Ngata), Caroline Kuea Nau (Tofa Moealu), Julia Kathryn Rehak (Trenton Douglas), Lehi Makamakisi Falepapalangi, Mahealani Moe (Tanu Leeland), Pauline Sieara Meleisea (Mckay Atitoa), and Lauaki Lemana Angilau Falepapalangi; and his grandson Stone Rehak. He is also survived by his seven siblings, Tamoni Fangufangu, Kalasini Falepapalangi, Sione Falepapalangi, Talita Ahosivi, Sela Manisela, Pauline Falepapalangi, and Siua Falepapalangi. Preceded in death by Sioeli Falepapalangi. Funeral services for Fred Stone Falepapalangi will be held on Saturday, December 12 at the Salt Lake Tongan South Stake Center (4660 W. 5015 S., Kearns, UT). Viewing services will begin from 7:30 a.m. to 10:30 a.m., followed by the Bishop's program. Burial services will be held at the South Jordan Memorial Park (10630 S. 1055 W., South Jordan, UT). Services are under the direction of Peni Malohifo'ou of Serenity Funeral Home Thank you to all who played a special role in the life of our beloved Fred Stone Falepapalangi. A special thank you to all the IHC physicians, nursing staff, and other healthcare workers who have been a part of his medical care throughout the years. His legacy will continue to live on and his life will always be remembered by those he came in contact with. We appreciate the sincere love and support by those near and far. God bless and 'ofa atu!

The family of Fred Stone Falepapalangi created this Life Tributes page to make it easy to share your memories.