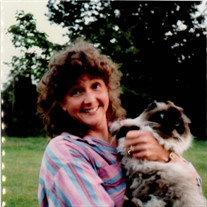 Freddie Terry Gard-Schafer. Our Sister Terry, received her Season Ticket Pass to the Notre Dame Stadium in the clouds on February 17th, 2020. Terry left us after Several bouts of ill health, the last of which was just too much for her body... View Obituary & Service Information

The family of Freddie Terry Gard-Schafer created this Life Tributes page to make it easy to share your memories.

Our Sister Terry, received her Season...