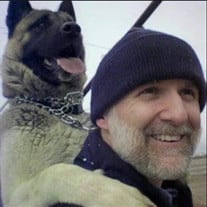 Michael passed away peacefully on Friday morning, Dec 13, 2019, surrounded by his family, ending his battle with GBM brain cancer. Born Jan 26, 1970 in Portland Oregon to Gary & Verna Harshberger. In 1973 his family moved to Provo, Utah and then settled in in Salt Lake City. In 1986 the family moved to a home in Taylorsville. He graduated from Mt. Vernon High School and enjoyed playing baseball on the school team. He then attended Ricks College for a year before serving a mission to the Canada British Columbia Mission for the Church of Jesus Christ of Latter-day Saints. After his mission he returned home and worked at PCMC hospital as a Phlebotomist. He married Desiree Sebert in 1994 but divorced in 1996 while he was attending school and working in Las Vegas. He married Amber Leavitt in the Las Vegas Temple in 1997 but the marriage was subsequently annulled. He did not have any children. He enjoyed learning different languages and could speak and read in six including Hebrew, Arabic, Spanish, French and Italian. He could speak the languages naturally and even volunteered as an interpreter during the 2002 Salt Lake Winter Olympics for the Italian team. He loved to snowboard and worked for the Canyon Ski Resort as a snowboard instructor. He enjoyed being around people and had a wonderful sense of humor. In 2003 he was diagnosed with prostrate cancer and had surgery to remove the cancer as well as additional lymph nodes in his system. He loved music and learned to play the piano by simply listening to music. In the early 2000’s he taught himself to play the guitar and cello. He enjoyed working at “The Guitar Center” store in Taylorsville, but moved back to Las Vegas in 2004. In the last year he even brought drum sticks so he could teach himself how to play the drums. From 2004 to 2009 he worked for Best Models in Las Vegas as a personnel manager at the Venetian Casino & Resorts. In 2010 he returned to college at Utah State University studying mathematics, and was a firearm instructor. A few years later he decided to get into the trucking business and settled in Yankston, South Dakota as a long haul truck driver. In September 2018, while visiting friends in Detroit Michigan, he had a seizure while at a friends home, which was determined to be from the effects of brain cancer. After three months of proton treatments in Michigan, he returned home to Taylorsville for continued cancer treatment. He loved the outdoors, and especially his Akita dog, Kuma. He loved his dog so much that he would always make sure Kuma had a good meal before himself. He is survived by his parents, siblings Michelle Marshall, Laura (Laerte) da Silva, Paul (Sabin) Harshberger, and Rachel (Thomas) Lindquist. He had eight nephews and six nieces who cared for him during his last year of life. They loved him dearly. Funeral services will be held at 11:00 am on Wednesday, Dec 18, 2019, at the Taylorsville 1st Ward Meetinghouse of The Church of Jesus Christ of Latter-day Saints located at 4845 S Woodhaven Drive, Taylorsville, Utah. There will be a 1 hour visitation prior to the funeral services at the meetinghouse. Interment at the Memorial Redwood Cemetery, 6500 S Redwood Road.

Michael passed away peacefully on Friday morning, Dec 13, 2019, surrounded by his family, ending his battle with GBM brain cancer. Born Jan 26, 1970 in Portland Oregon to Gary & Verna Harshberger. In 1973 his family moved to Provo, Utah and... View Obituary & Service Information

The family of Gary Michael Harshberger created this Life Tributes page to make it easy to share your memories.