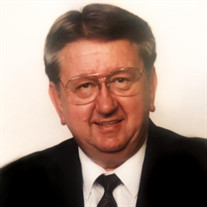 Our family Patriarch, Gary Keith Hatfield, passed away on July 9, 2020 as a result of long time complications of diabetes and ultimately COVID-19. He was born at home in Mapleton Utah on March 14, 1937 to Keith Winston and Thelma Watkins Hatfield. He was reared in Springville and Orem until he and his father purchase a large ranch near Ephraim, known as Pigeon Hollow. Gary bought his own 80 acres and worked it to provide for his education, learning how to work hard and appreciate everything he had been given and earned. He graduated from Snow College where he was active in athletics, participated in drama, campus publications and played violin both the College Orchestra and String Quartet. He married his college sweetheart (and High School debate opponent) Janet Benson, on September 21, 1957 in the Manti LDS temple. The young couple attended BYU where Gary graduated in Chemical Engineering. He was President of the Chemical Engineering Society and Chairman of Engineering Week in 1960. Gary became Chief Chemist for the U.S. Dept. of Reclamation in the S.L. Lab and operated the first laboratory computer of its kind in the region and received a commendation for his accurate “hand” titrations. After retirement with the government, he did pharmaceutical research for the U of U and also DataChem. Always active in community and church work, he was PTA President at Granite Park Jr. H.S., worked in the Sunday school and with Cub Scouts. He and Janet served a full time mission in Nauvoo, IL. and for five years as docents at the Church History Museum of Art & History. They also served in the baptisteries of the Salt Lake and Jordan River temples for several years. He loved watching his children in all of their activities and spent countless hours supporting them in the bleachers at little league, H.S. and college games. He was extremely proud that all five children served as missionaries and each had earned at least a B.S. degree. Gary is survived by his wife Janet and children: Karen Nowling (Scott), Gregory Keith (Susan), John Golden (Patty), N. Benson (Anne), and 15 Grandchildren and two Great Grandchildren and Noriko Doi (Narita, Japan) who is loved as a daughter and sister. Gary is proceeded in death by two children: Kelly McCarthy (James) and Gary Benson Hatfield, one Granddaughter Diane Hatfield and by his parents and two brothers R.G. and Dale. There will be a viewing Saturday, July 18, 2020 at the LDS Chapel 1208 W. 12400 So., from 9:00-10:30 a.m., followed by a service for the family following COVID protocol and internment at the Springville Evergreen Cemetery. Please share memories and condolences at www.serenityfhs.com.

Our family Patriarch, Gary Keith Hatfield, passed away on July 9, 2020 as a result of long time complications of diabetes and ultimately COVID-19. He was born at home in Mapleton Utah on March 14, 1937 to Keith Winston and Thelma Watkins Hatfield.... View Obituary & Service Information

The family of Gary Keith Hatfield created this Life Tributes page to make it easy to share your memories.

Our family Patriarch, Gary Keith Hatfield, passed away on July...