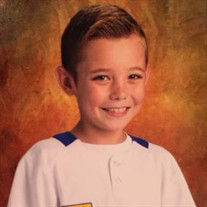 In April 2015 Gavin was diagnosed with an inoperable brain tumor (DIPG). After a long hard fight, Gavin was blessed with wings to fly to paradise. He is now reunited with "Oreo" his beloved hamster that was so dear to him. Everyone who knew Gavin couldn't help but be drawn to his big smile and his easy-going manner. He was always happy! Gavin loved shooting hoops, and riding his scooter, but his heart belonged to the game of baseball. His favorite baseball team was the Denver Rockies and he set the DVR to record all of their baseball games, and then one day we couldn't record anything else because we found that the memory was full of Rockies games. Gavin attended Edison Elementary School which was in a different school district than his Taylorsville teammates, and on school picture day at Edison, Gavin wore his Taylorsville baseball jersey! Last month, Gavin's classmates at Edison made him a blanket with the Taylorsville colors blue and gold, and they all signed it. His class called him their walking dictionary, and he was known as the funniest kid in the fifth grade because he loved to laugh and make everyone around him laugh. Through this whole ordeal, Gavin only complained one time; he said the tumor took his freedom away and that he just wants to play baseball once more. Gavin has finally gotten his freedom back, and we know that he gets to play the game that he loves. Gavin is survived by his parents, Doug and Mitzi Lloyd, and also his constant companion in life, his biggest fan, and best friend— his big sister Celeste. Also survived by his little half-sister Tommi Paige, his birthparents, Wesley and Christol Williamson, grandparents, Gregg and Bea Williamson, grandma Gaye Williamson, great grandma Lavon Tanner (GG), aunts and uncles, Troy and Debbie Jacketta, Vinnie and Whitney Fassio, Darren and Stephanie Williamson, Lori Gardner and Wade Baker, Christopher, Carson, and Krsna Muscheck, cousins, Dalynn Baker, Tony Jacketta, and Tiffany Thomas, Cole, Jessi, and Oaklee Simmons, Brandi Jacketta and Colton Howcroft, Luke Jacketta, Clara and Owen Williamson, Rocco and Dominic Fassio, Richie, Melissa, Kayleeah, and Zealan Galuvao, Ashley, Jeremy, Paizlee and Emery Brown, and many more cousins. We would like to thank all of our family and friends for their help, love, and support throughout Gavin's adventure. Our deepest gratitude is extended to the Taylorsville Baseball Community, Sons of Baseball Foundation, Mascot Miracles Foundation, Millie's Princess Foundation, Kids Heroes Foundation, Make-A-Wish Foundation, the Intermountain Homecare and Hospice team, and Edison Elementary School students and staff. An extra heartfelt thank you to Jazz Bear and Felix the Falcon! In lieu of flowers, please support one of these great foundations. The viewing will be held on Tuesday, March 8, 2016 from 6 to 8 PM at the LDS Ward House located at 5775 S. 2700 W., Taylorsville, UT, and a Celebration of Gavin's life will be held on Saturday, April 2, 2016 from 4 to 6 PM at the Taylorsville Baseball Complex located at 5059 S. 2200 W., Taylorsville, UT. #GAVINSTRONG!

In April 2015 Gavin was diagnosed with an inoperable brain tumor (DIPG). After a long hard fight, Gavin was blessed with wings to fly to paradise. He is now reunited with "Oreo" his beloved hamster that was so dear to him. Everyone who knew... View Obituary & Service Information

The family of Gavin Wesley Williamson Lloyd created this Life Tributes page to make it easy to share your memories.

In April 2015 Gavin was diagnosed with an inoperable brain tumor...