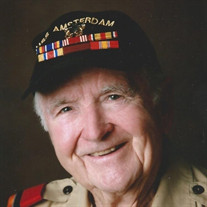 George Stanton Barrus, a longtime resident of Provo, passed away on July 27 in Columbia, Missouri where he was living with his daughter, Michelle Brinkerhoff, and her family. He was 92. His journey started in Long Beach, California in 1925, and took him to over 48 countries. "We can eat when we get home," was his travel mantra, not wanting to miss a single item in the Michelin guide along the way. Dad was blessed with boundless energy throughout his life which seemed to defy the laws of physics. He was an object in motion which always remained in motion never ceasing in good works. Whenever his forward momentum slowed for just a moment, he was reading. It was almost impossible to find a book he hadn’t read. He served in the Navy in the Pacific in WWII, a mission to Sweden, and missions with Mom to Newfoundland, South Africa, and Southeast Asia. He earned three academic degrees and finished his working career at BYU as a professor where he taught advertising and public relations. He loved the semesters abroad he led with students to France and Austria. He was an avid scouter and Eagle scout, serving for over 50 years. We were hopeful that he was finally getting serious about retirement when he bought a hot tub at the age of 88. True to form, he rarely found the time to use it. Relaxing is one of the few things Dad never quite figured out. He was a faithful Latter-day Saint and will continue his service on the other side even as his righteous example inspires us here to do better. He is survived by his sisters Gae Haynie and Marge Brunson, sons Craig, David, Kent, Lee and James, and by his daughters Brenda Christensen and Michelle Brinkerhoff. He also leaves behind 31 grandchildren and 31 great grandchildren. He was predeceased by his wife Merlynn, his son John, and his sister Marilyn Russell. A viewing will be held Friday, Aug. 4, from 6-8. Sat., Aug. 5, viewing from 9:30-10:30 followed by a memorial service at 11:00 AM at the Grandview 13th Ward chapel, 1260 W. 1150 N. Provo, Utah. Please have flowers sent directly to the church at that address.

George Stanton Barrus, a longtime resident of Provo, passed away on July 27 in Columbia, Missouri where he was living with his daughter, Michelle Brinkerhoff, and her family. He was 92. His journey started in Long Beach, California in 1925,... View Obituary & Service Information

The family of George Stanton Barrus created this Life Tributes page to make it easy to share your memories.

George Stanton Barrus, a longtime resident of Provo, passed away...