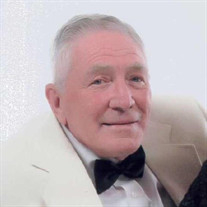 George Franklin Robinson, age 87, died February 6, 2022 Highland Glen, Highland, Utah. Born January 11, 1935 in Minersville, Utah to Wilford John Robinson and Alvaretta Corbridge Robinson. Spouse is Janet Ray Parkinson. Married June 18th 1954 in Elko, Nevada. Later Sealed on July 6, 1962 in the Logan Temple. Raised in Minersville and Beaver, Utah, he had some very special friends he’s kept in contact through the years. He loved his horse Roan. Rode all over the mountains in Minersville which was his preferred method of travel back then. He loved Mining, he got this hobby from his grandfather and dad. Mining was passed down to the family and grandchildren. He loved the South Fork, fishing, riding horses and camping. For over 50 years his family would meet on Big John’s Flat on the 24th of July for a family reunion. We’d sometimes travel down to Beaver for the parades, horse races and rodeo. Most of all, he loved to visit. Dad worked for the Union Pacific railroad as a brakeman for years. Later, he worked many years for different trucking companies. Then, went on to become an owner/operator of his business, Paint Horse Express, where several grandsons learned to drive with him. Dad also work for highland Dairy, which he enjoyed. His passion was going out to the west desert and watching and chasing wild horses, which many of us shared that passion with him. Dad and mom loved to travel, pack up their motor home and drive up the Oregon coast. They went on many cruises. As a member of the Church of Jesus Christ of Latter-Day Saints, he had been ordained a high priest. He also he the honor of singing the national anthem at the Manti pageant. That was one of highlights in his life. He had a beautiful voice. He grew up singing to the radio, and loved singing in church, nursing homes. He loved to make up or sing funny songs to his grandkids, along with making up nick names for everybody! Survived by his wife of 67 years, Janet Ray Parkinson of Highland, Children: Blake and Teresa and 5 children of Saratoga Springs, Debbie Robinson Sweat and 7 children of Heber City, Michael and Kelly Robinson and 4 children of Lehi. Loralie Robinson and 5 children of Beaver, Utah, Shawn and Jenn Robinson Lewis and 3 children. He leaves behind a legacy of 22 grandchildren and 54 great grandchildren. Also preceded in death by his brother Roldo (Edna) Robinson, sister Genevie (Don) Clark, sister Larena (Richard) Schwab.

The family of George Franklin Robinson created this Life Tributes page to make it easy to share your memories.