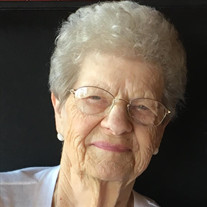 Geraldine “Geri” Billis Our beloved mother, grandmother, sister, aunt, and dear friend, Geri Billis, age 85, passed away February 19, 2018, in Draper, Utah. She was born November 28, 1932, to Henry and Bernice (Spah) Merfeld in La Crosse, Wisconsin. Geri was one of nine siblings. She was so grateful to have traveled “home” to Wisconsin to visit with her tight knit extended family in October 2017. Geri married Thomas Billis in La Crosse on November 10, 1951. They celebrated their 66th wedding anniversary just before his passing a year ago. The most important thing in her life was being a mother to her four children as well as a grandmother and great grandmother. She loved giving to others and put that love into every card, gift, and batch of cookies she baked. She was always up for a shopping trip or lunch out with “the girls,” and never missed a birthday. Geri was a member of the Catholic Church and attended St. John the Baptist Parish in Draper, Utah, at the time of her death. Throughout her life, she was an active member and devoted servant to her Catholic faith which meant the world to her. One of her last requests was to have the Anointing of the Sick by her parish priest, Father Rick Sherman. Geri was an avid bridge player. She would play with a small group of women in the West Valley City area and enjoyed herself completely because they “wanted to have fun and weren’t too competitive.” More often than not, she won “low” which meant a couple dollars worth of pennies. Geri was given the devastating diagnosis of an aggressive form of cancer just 12 days before her passing. The amazing tender mercy was she never experienced any pain right up to the moment she went home to meet her Savior and her loved ones. Geri’s family want to thank the Valeo Hospice nurses who were so instrumental in making her final days comfortable and calm, and for their quick attention to every need of both the patient and her family. Geri is survived by her children, Michael Billis, Cynthia (Lynn) Powell, and Cheryl (Jeff) Lowry; 4 grandchildren; 11 great grandchildren; 2 great great grandchildren; brothers, Paul “Pickle” Merfeld, Francis “Butch” (Juanita) Merfeld, Lawrence “Skip” (Mary) Merfeld, David (Susan) Merfeld; sister, Kay Vigdal; and many nieces and nephews. Preceded in death by her parents; husband; son, Daniel Billis; 2 granddaughters; 2 great grandsons; brother, Thomas Merfeld, Sr.; and 2 sisters Corrine “Corky” Lounsbrough and Margarite Mary Merfeld. A viewing will be held at 10 to 11 a.m. on Saturday, February 24, 2018, at Serenity Funeral Home of Draper, 12278 S. Lone Peak Pkwy, Draper, UT. Graveside services to follow at Mount Olivet Cemetery, 1342 East 500 South, Salt Lake City.

The family of Geraldine M. Billis created this Life Tributes page to make it easy to share your memories.