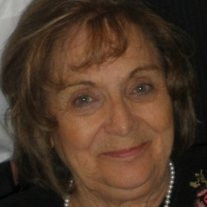 Geraldine (Geri) Crandall Goldsmith 1933 – 2013 A Legacy of Faith, Obedience, and Service Our beloved wife, mother, grandmother, great-grandmother, and sister passed away on November 9, 2013, in Salt Lake City, UT of complications from hip surgery. She was born May 15, 1933, in Salt Lake City to Martie O. and Ella Crandall. She grew up in Twin Falls, ID, the 4th of 10 children. She graduated from Twin Falls High School where she met and maintained lifelong friends. Geri attended BYU where she met her husband of 60 years, Henry, on a blind date. They were married in the Salt Lake Temple on September 16, 1953. They raised their family in Whittier, CA and then moved to Sacramento in 1977. They retired to Draper, UT, to be close to family in 1999. She was a faithful member of The Church of Jesus Christ of Latter-Day Saints, serving in Stake and Ward callings including Relief Society President, Young Women’s President, and Primary President. Geri helped plan and coordinate various festivals in Southern California including a dance festival put on in the Rose Bowl. She was active in the Daughters of the Utah Pioneers for the last 14 years. She loved family history and sharing the stories of her ancestors. Out of all that she did, the most important thing to her was her family. She loved to cook and entertain with her children, grandchildren, great-grandchildren, brothers, and sisters. Preceding her in death were her parents and siblings: Bob (survived by Shirlene), Lentz (survived by Lila), Maureen Mallory, LaWana (survived by Clark) Whitehead, and Ellis. She is survived by her brothers; Richard (Marilee), Elwin (Linda), Ted (Janice), and sister; Mary Jane (Jim) Johnson. Also surviving her is her husband, Henry Goldsmith of Draper, UT, along with her children Steven (Janet) of Sandy, UT, Vicki of Gilbert, AZ, Karen (Bick) Newbold of Orem, UT, Ken (Lori) of West Jordan, UT. She is survived by 17 grandchildren and 13 great-grandchildren. The funeral services will be held on Friday, November 15 at 11:00 am in the Mountain Point 7th Ward, 420 East Stokes (13540 South), Draper, UT 84020. Viewings will be held on Thursday, November 14 from 6:00-8:00 pm and on Friday from 10:00-10:45 am at the church listed above prior to the funeral. Interment will be at Larkin Sunset Gardens. Condolences may be sent to the family at www.serenicarefuneralhome.com

The family of Geraldine Goldsmith created this Life Tributes page to make it easy to share your memories.