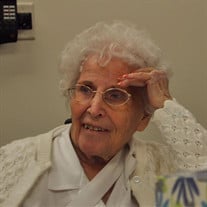 Geraldine Anderson Henrie, 91 years of age, passed away quietly Tuesday morning January 26, 2016 at the Millard County Care Center in Delta, Utah. Geraldine, Gerry as she was known by family and friends, was born in Elsinore, Utah on May 17, 1924, the daughter of Aaron Elton Anderson and Sarah LeLand Roberts. When just one month old the family moved from Elsinore to Hinckley where Gerry grew up and graduated from Delta High School. On February 28, 1942 she married Joseph Ward Henrie of Delta, son of Marion Henrie and Artemisia Cutler. They lived in Delta for about 8 years and then moved to Ogden where Joseph worked, building LDS chapels, a trade which later took the Henrie family around the United States to build chapels in many cities. Geraldine was very devoted to her husband and supported Joe in his work, no matter where it took them. Always actively involved in the LDS church, she held many callings in Primary and Relief Society, and she also taught Seminary. She often made quilts, knitted, and crocheted, and she was an excellent seamstress. Family meant everything to Geraldine, she and her beloved Joe raised eight children, and she was very proud of each one. Visitors were likely to hear about all of the good things in which her children were involved. She is survived by her children Don Henrie of Hebron, Illinois; Ilene Maurer of Enoch, Utah; Brent Henrie of Irvine, California; Danny Wariner (son-in-law) of Lambert, Montana; Vickie Crawford of West Valley City, Utah; Janet Christensen of Rexburg, Idaho; Gaylen Henrie of St. George, Utah; and Patricia Bangerter of Hemet, California; in addition, she has thirty-six grandchildren, ninety-six great grandchildren, and five great-great grandchildren. She is also survived by two sisters, Donna Cox and Sheila Ogden. She was preceded in death by her husband Joe Henrie, her daughter Marie Wariner of West Valley City, Utah; two brothers and a sister. A viewing will be held from 11 to 12:30 Saturday morning in Delta, Utah at the Delta Stake Center, 125 White Sage Avenue. The funeral will be at 1 PM in the same building, with the internment following at the Delta Cemetery.

Geraldine Anderson Henrie, 91 years of age, passed away quietly Tuesday morning January 26, 2016 at the Millard County Care Center in Delta, Utah. Geraldine, Gerry as she was known by family and friends, was born in Elsinore, Utah on May 17,... View Obituary & Service Information

The family of Geraldine Anderson Henrie created this Life Tributes page to make it easy to share your memories.