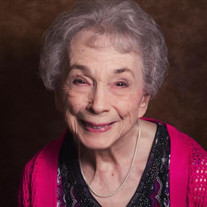 VaLoy Hansen Marchant VaLoy Marchant died Monday, April 29. She had just celebrated her 90th birthday. VaLoy was born March 5, 1929 to Gerda W. Hermanson and Elmo J. Hansen in Salt Lake City. She graduated from West High School and went to BYU to study music. Before she graduated, she was swept off her feet by a handsome Mid-shipman from Annapolis Naval Academy, Maurice (Mike) Marchant. They were married on June 3 in the Salt Lake Temple. They had seven children: Catherine (Sherman Myers), Barrie, Alan (Lorie), Roxanne Fillmore (Allen), Anne Drew, David (Gabriela) and Theresa Marchant-Shapiro (Andrew). VaLoy was a most creative woman. She wrote children’s books, entered recipe contests with her own original recipes, made dolls and many quilts. Beautiful music and bright colors were food for her soul. VaLoy had three things on her bucket list: finish college, travel, and serve a mission. She completed them all. She received a Masters Degree in Early Childhood Education from BYU, served a mission to Montana with Mike, and traveled to Sweden with Mike for their 50th anniversary, and England, Hawaii, and Alaska with daughters. VaLoy had compassion for all of man-kind. She welcomed many people into her home, friends of her children, college students, grandchildren and the odd homeless wanderer. Some stayed for a night, many lived with her for months or years. VaLoy was a devoted member of the Church of Jesus Christ of Latter-day Saints. She served in many callings, but, her favorites were leading the choir and volunteering at the temple. VaLoy is survived by her sisters, Eileen Peterson and Tania Madsen; her seven children, Catherine (Sherman Myers), Barrie, Alan (Lorie), Roxanne Fillmore (Allen), Anne Drew, David (Gabriela), and Theresa Marchant-Shapiro (Andrew); and numerous grandchildren and great grandchildren. She was preceded in death by her husband, parents, brother, Lew Hansen and a great granddaughter. The funeral will be held Monday, May 6 at 11:00 AM at the Cedar Hills West Stake Center, 4580 W Cedar Hills Drive, Cedar Hills, Utah. Visitation will precede the service at 9:30-10:45. Interment will follow at East Lawn Memorial Hills, Provo. Those wishing to honor her memory may make a donation in her name to the Friends of the Provo Public Library or Primary Children’s Hospital.

The family of Gerda VaLoy Marchant created this Life Tributes page to make it easy to share your memories.