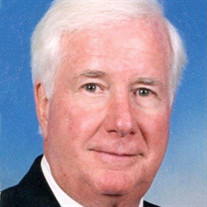 Glenn Howard Peterson passed from this earth peacefully, on July 8, 2021, with his wife by his side. He was 90 years old. Glenn was born on September 29, 1930 in Logan, Utah. He was the youngest son of Charles Overn and Libby Fox-Park Peterson. He was the youngest brother to Charles Overn Jr. (Dorothy), and Dorothy Jean Peterson-Gabrielson (Dr. Lyman). Glenn attended Logan High School where he played basketball and tennis, winning numerous doubles and singles tennis tournaments. During his high school years, he earned the rank of Eagle Scout. He received a tennis scholarship to Utah State University. After two years of college, Glenn served an LDS Mission to the East Central States (Kentucky, Tennessee, and West Virginia). He returned to USU to complete his degree. He was a member of the ROTC, as well as SAE and Delta Phi fraternities. After graduation Glenn served with the United States Army spending time at Fort Lee Virginia and Nurnberg Germany where he earned the rank of Captain. Glenn went on to earn his Masters Degree at Brigham Young University. Glenn married Karen Fugal on December 26, 1979. Their marriage was later solemnized in the Salt Lake Temple. They were parents of Steven Shawn Murray (Jennica). Grandparents of Laura Peterson (Skyler), Shawn, Alyssa, Cameron, and Ashley. Great Grandparents of Mason and Marley. Glenn spent most of his career teaching Accounting, English, and English Literature at Granite High School in Salt Lake City. He was also the coach of the tennis team. After retiring Glenn worked at the Salt Lake Community College. Tennis remained Glenn’s great love. As an adult he competed in age groups 30 through 85, playing throughout Utah, Washington, Wyoming, Idaho, Colorado, California, Nevada, and Texas winning more than 100 trophies. Glenn was an active member of The Church of Jesus Christ of Latter Day Saints where he served in many callings including second counselor in the bishopric, priesthood instructor, and ward clerk. He and Karen served together in an inner-city mission. Glenn is survived by his wife Karen, son, daughter in law, grandkids, and great grandkids. Glenn was preceded in death by his parents, his siblings, and his great grand daughter Gypsy. A viewing will be held at the Little Cottonwood 20th Ward, 1160 East Vine Street in Murray, Utah on Tuesday, July 13, 2021 from 9:30-10:30am. There will be a graveside service held at 11:30am at the Pleasant Grove Cemetery, 500 North 100 West, Pleasant Grove , Utah.

Glenn Howard Peterson passed from this earth peacefully, on July 8, 2021, with his wife by his side. He was 90 years old. Glenn was born on September 29, 1930 in Logan, Utah. He was the youngest son of Charles Overn and Libby Fox-Park Peterson.... View Obituary & Service Information

The family of Glenn Howard Peterson created this Life Tributes page to make it easy to share your memories.

Glenn Howard Peterson passed from this earth peacefully, on July...