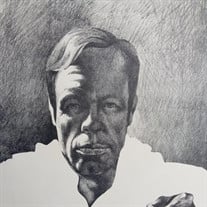 Grant L. Lund passed away peacefully of natural causes on March 9, 2021 at the age of 83. He will be remembered as an artist, educator, father, grandfather and husband who loved to engage everyone in his passion for how people relate to art. Born on April 23, 1937 in Fountain Green, he grew up in Murray, Utah and graduated from Murray High School. He served a mission for the Church of Jesus Christ of Latter Days Saints in the West Central States Mission from 1958 to 1960 and married Marcia Hall in 1963. He earned his Doctor of Education degree from Penn State University in 1973 (he was always proud to wear his Nittany Lions gear) and Master of Fine Arts degree in printmaking and painting from Brigham Young University in 1966, where he was an early participant in the Mormon Art and Belief group. He was a beloved educator with lasting impact on many students. His professional roles included teaching art in grades 3-12 in Monticello, Utah; starting the art department at New Mexico Junior College in Hobbs, New Mexico; teaching as a graduate assistant at Penn State in State College, Pennsylvania; and a 28 year career as a professor of art at Southeast Missouri State University in Cape Girardeau, Missouri. He received numerous awards and recognitions for his artistic achievements and community contributions, including the Otto F. Dingeldein Award, given annually by the Arts Council of Southeast Missouri for achievement of excellence in the arts. His art was exhibited across the United States. He was extensively involved in community art activities and will be remembered for the many portraits he drew and the art that he freely shared. In Southeast Missouri he will be remembered for organizing The Drawing Group, a community group of artists that met weekly to work from models. He also designed the Jackson mural and painted the William Faulkner and Stephen Hawking murals located respectively in the Kent Library and College of Science at Southeast Missouri State University. He was a deep thinker. His research and writing focused on the question, “What does art have to do with life?” and his writing included subjects such as “Art and Basic Human Needs”, “Christ and the Creative Individual”, and “Art: the Fourth R”. He loved and was very proud of his family. He is survived by his wife, Marcia, his brothers Gerald and Michael, his sister Sheryl, his children Jed, Mack, Jozanne, Naomi, Jenny, Elizabeth, and Andrea and 14 grandchildren. Funeral services will be held on Tuesday, March 16, and live streamed at https://youtu.be/JsrsYXKhY6k, starting 11am Mountain Time. Interment will be in the Orem Cemetery in Orem, Utah. Those who would prefer to make a donation in lieu of flowers can donate to the Springville Museum of Art.

Grant L. Lund passed away peacefully of natural causes on March 9, 2021 at the age of 83. He will be remembered as an artist, educator, father, grandfather and husband who loved to engage everyone in his passion for how people relate to art. Born... View Obituary & Service Information

The family of Grant L Lund created this Life Tributes page to make it easy to share your memories.