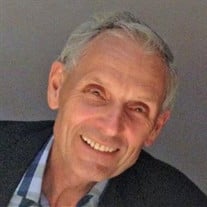 Guy Jordan, 69, of Alta and Holladay, Utah, passed away at home in the early morning hours of December 18, 2017 after an almost 27-month battle with glioblastoma – a lethal form of brain cancer. One of six children, he was born June 17, 1948 on a farm in Detroit, Michigan to parents Joseph and Geraldine Jordan. His childhood responsibilities on the farm included tending the chickens which resulted in a lifelong dread of eggs. Guy graduated in 1970 from Oakland University in Rochester, Michigan, and went on to earn his PhD in Organic Chemistry from Georgetown University in 1976, and an MBA in 1985 from Farleigh Dickinson University. In Washington DC he married Barbara Koziol on May 18, 1974 and they welcomed their son, Guy Jordan, II into the world in 1978. Guy went on to have a very distinguished corporate career including progressive Research and Development roles at Lederle Labs, and American Cyanamide. Guy then joined C.R. Bard, Inc in a Senior R&D role and quickly moved into a Division President role at Bard Access Systems in Salt Lake City. He then joined the Senior Executive leadership team at the corporate headquarters of Bard in Murray Hill, NJ. Guy retired in 2002 and was active in many corporate Boards throughout his retirement including being Chairman of the Board in several. Of particular note was his participation on the Orthofix International (NASDAQ: OFIX) board where he served for 13 years as a Non-Executive Director and chaired the Compensation Committee. Upon his retirement from that Board earlier this year, they named their research facility The Guy Jordan Institute. In addition to his passion for business, Guy was an expert skier and loved carving down the double blacks at Alta. It should be mentioned that he used to “terrorize” skiers by routing them through the steep tree terrain at Alta and making them climb up to “Baldy” and ski the vertical chutes. Guy and Barbara also went to the Burgundy region of France every year to taste the latest vintages and add to their impressive cellar. Guy is survived by his wife, Barbara, his son, Guy, and his siblings– Brian, Jerry, Corinne and Joe Jordan; his brother Bruce passed away in 1992. Guy’s body was donated to the Neuro/Spine research program at Huntsman in the hopes that some day we will find a breakthrough in this terrible cancer. Guy’s final message before his passing to all his family and friends was, “Don’t cry because it’s over; Smile because it happened.” Donations can be made to The Huntsman Cancer Foundation in memory of Guy Jordan at 801 584-5800. A Celebration of Guy’s Life will be held in June 2018. Until then, please feel free to stop by the Jordan’s and raise a glass to Guy.

Guy Jordan, 69, of Alta and Holladay, Utah, passed away at home in the early morning hours of December 18, 2017 after an almost 27-month battle with glioblastoma &#8211; a lethal form of brain cancer. One of six children, he was born June 17,... View Obituary & Service Information

The family of Guy Jordan created this Life Tributes page to make it easy to share your memories.