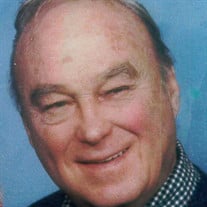 Harry W. Duchene 1928 - 2015 Harry Duchene was called back to his Lord on Friday, February 27, 2015 in Salt Lake City, UT. Harry was born in Chicago IL on January 22, 1928 to Harry Joseph and Anna Ester Green Duchene. He grew up in the Chicago area, then served in the US Coast Guard from 1946 to 1949, especially in the Philippines. Graduated from the University of Washington with a degree in Electrical Engineering in 1953. Harry met, then married the Love of his life, Leona Quasny on April 24, 1954 in Chicago, IL, raising a family of 3 boys and 3 girls who he dearly loved and supported his whole life. He enjoyed spending as much time as possible with them, and his grandchildren. Harry had a long, successful career with Sperry, starting in New York, moving with the company several times. Some of his most notable projects were with the Apollo Space Mission, the earliest drones, ’LAMPs’, as well as other vital military projects. Harry was able to enjoy many years in retirement (from Unisys) with Lee: building a dream home in Payson AZ, traveling the world for fun and traveling to visit family and friends. Later, at Olympus Senior Center he made many friends and worked to improve his Bridge game. Survived by children: Leslie J (Wendy) Duchene (WA), Dia Smith, Scott Duchene, (SLC) and Gina A. Duchene (NM). Seven grandchildren and 2 great-grandchildren. Brothers Eugene and Alfred Duchene and sister Anna Mae Leahey. Preceded in death by his wife, Leona G., son Jeffrey and daughters Denise and Valerie Powell. Special thanks to Tyson and Leta Howard for their tireless efforts for Grandpa these past few months. A Mass of Christian Burial will be on Wednesday, March 11, 2015 at 11:00 a.m. at St. Vincent DePaul Catholic Church, 1375 E Spring Lane, Salt Lake City, UT In lieu of flowers, please contribute to a charity of your choice. Interment in Rib Lake, WI

Harry W. Duchene 1928 - 2015 Harry Duchene was called back to his Lord on Friday, February 27, 2015 in Salt Lake City, UT. Harry was born in Chicago IL on January 22, 1928 to Harry Joseph and Anna Ester Green Duchene. He grew up in the Chicago... View Obituary & Service Information

The family of Harry William Duchene created this Life Tributes page to make it easy to share your memories.

Harry Duchene was called back to...