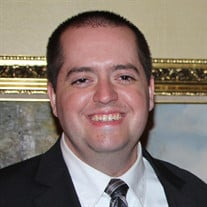 Harry Cassidy Fisher, 28, beloved son, brother and friend, ended his life on Feb. 13, 2016. Harry was born at home in Salt Lake City on March 5, 1987. He grew up in Orem, Utah, attended Orem High School, and most recently lived in Draper, Utah. Harry attended Brigham Young University as a history major, and he worked for Ancestry.com for several years. Harry is survived by his parents, Claire Fisher and Paul (Diana M.) Fisher; siblings, Heather Fisher, Sarah (Jacob) Clark, Fernando, Diana E., Aldrin, and Ingram Fisher; aunts, Cathie and Marla; his uncle, Lou; and nieces, Dezirae and Kiara. Harry will always be remembered for his intelligence and clever sense of humor. He valued his college education and worked diligently to maintain a 3.97 GPA. Harry served an honorable mission for the Church of Jesus Christ of Latter-day Saints in Rochester, New York, from 2006-2008, and enjoyed his most recent calling as a Gospel Doctrine teacher. Harry loved the Rochester area and later returned to live there to write a book. He was a talented writer and had an affinity for reading and writing science fiction and fantasy literature. Harry recently identified himself as gay and always modeled unconditional love and acceptance of all people. A memorial service will be held at 11 a.m. Saturday, March 5, at the Walker Sanderson Funeral Home, 646 E. 800 N. in Orem. The family will be greeting friends and relatives from 10:00-11:00 a.m. In lieu of flowers, memorial donations may be given to suicide prevention or LGBT support organizations, such as Hope 4 Utah (www.hope4utah.com), American Foundation for Suicide Prevention (www.afsp.org) and the Utah Pride Center (www.utahpridecenter.org). For help recognizing suicidal behaviors, please visit www.utahsuicideprevention.org, and seek support by contacting a mental health professional or calling 1-800-273-TALK.

The family of Harry Cassidy Fisher created this Life Tributes page to make it easy to share your memories.