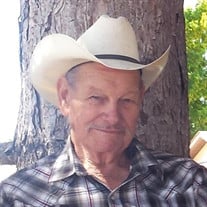 Harry Joseph Ledbetter&#8230;. This is where our cowboy rides away&#8230; On April 3, 2022 Harry left his home in Herriman, Utah to go to the big corral in the sky and scoop his sweetheart Joan up into his tractor, so the two of them can ride... View Obituary & Service Information

The family of Harry Joseph Ledbetter created this Life Tributes page to make it easy to share your memories.

This is where our cowboy rides away…...