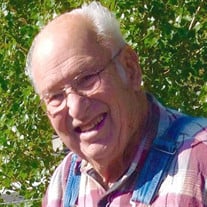 Heber Dale Nilsson, 87, passed away peacefully in his sleep on June 4th in Heber Utah. He was born October 18, 1930 in Midvale Utah to William Leslie Nilsson and Mildred Irene Higginson. He was married to the love of his Life Beverly Dean Bird in the Salt Lake Temple November 18, 1952. Dale lived a joyful life of service lifting all who knew him. Dale was quick to remember the good and find the positive in any situation, something he carried with him through his life up to the very end. He attended Jordan High School where he was called “Duck” by his friends. He was called on a foreign LDS mission and was happy to serve in the four corners area among the Navaho People, who he loved throughout his life. He also served honorably in the military defending our freedoms, a pride he felt and spoke of often. His life was one of service both to those close to him and to those he never knew. He married Beverly Dean Bird and cherished her up to the day he left this earth. He looked forward to being reunited with his one and only true love, although his dog Buddy came a close second keeping him company for the last decade of his life. Beverly and Dale loved and served their five children Randy, Kevan, Brian, Tracy, and Stephanie with all their heart and soul. Dale taught a strong work ethic with honesty and integrity often holding multiple jobs to support the family. In their later years it was their pleasure to serve two LDS Missions to Nauvoo to serve many who came seeking beauty and peace. Dale enjoyed gardening, keeping colorful flowerbeds, and working in his well-kept yard. A long time resident of Sandy, Utah, his neighbors will remember him fondly for his friendly smiles and enthusiastic waves from his porch as they walked by his home. His example will not be forgotten as it was ingrained in each of his children and the many who knew him and served alongside him. Years hence, as those who loved him recall the qualities that set Dale apart will remember his ever present optimism, his depth of gratitude and his always cheerful countenance. Dale was preceded in death by his sweet wife Beverly and his son Brian. He is survived by four children, Randy and Sheri Nilsson, Kevan and Sherri Nilsson, Tracy and Deborah Nilsson, and Stephanie and Mike Pitts. His joy was his grandchildren and great grandchildren and lived for their visits as they came to give papa kisses, hugs, and minister to him daily. He was buoyed up and treasured his many friends, ward members, and neighbors who greeted him warmly and were lifted by his optimism. He will be honored with a military salute and graveside service beginning at 11:00 a.m. Friday, June 8th at the Camp Williams Veterans Memorial Cemetery 17111 S. Camp Williams Rd, Bluffdale, UT. His family would like to thank the many special people who served Dale in his final days, particularly those at Home Instead Home Care, Encompass Hospice, the Abbington Care Center in Heber, and the very caring people at Serenity for helping make this transition gentle for the family. He was very blessed to have many loved ones close by who visited him daily and took care of him and his yard when he no longer could - Thank you Bree and Josh and your giving children. His grandson Jay administered to him with charity and patience in his last years and his sweet angels Stephanie and Sherri lovingly served him faithfully and tirelessly when his needs where greatest as he transitioned from this world to his heavenly home. Thank you to these special people and all who helped in his final years bringing him joy and helping him find peace following his example of service. We are so very grateful for all of you who have shared your love in bearing our sorrow and pray we may all find peace, as Dale did, in service to others.

Heber Dale Nilsson, 87, passed away peacefully in his sleep on June 4th in Heber Utah. He was born October 18, 1930 in Midvale Utah to William Leslie Nilsson and Mildred Irene Higginson. He was married to the love of his Life Beverly Dean... View Obituary & Service Information

The family of Heber Dale Nilsson created this Life Tributes page to make it easy to share your memories.

Heber Dale Nilsson, 87, passed away peacefully in his sleep on...