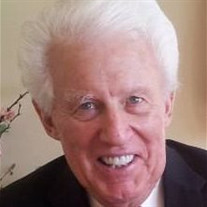 Henry Lloyd Goldsmith 1929 – 2014 A Legacy of Integrity, Obedience, and Honor Our beloved father, grandfather, and great-grandfather passed away on May 20, 2014, in Salt Lake City, UT after suffering a heart attack. Henry was born in Salt Lake City on April 20th, 1929 the only child of James Lloyd and Muriel Goldsmith. He moved to Los Angeles when he was 6 months old. He served a 33 month mission to Brazil from 1949 to 1952. Henry attended BYU where he met his wife of 60 years, Geraldine, on a blind date. They were married in the Salt Lake Temple on September 16, 1953. They raised their family in Whittier, CA and then moved to Sacramento in 1977. They retired to Draper, UT, to be close to family in 1999. Henry worked as a sales representative for various furniture companies for over 40 years. He was a faithful member of The Church of Jesus Christ of Latter-Day Saints, serving in Stake and Ward callings including Bishop, High Priest Group Leader, Counselor, Usher at Temple Square, as well as many other callings. Henry loved to work in his yard and spend time with his family. He is survived by his 4 children; Steven (Janet) of Sandy, UT, Vicki of Gilbert, AZ, Karen (Bick) Newbold of Orem, UT, Ken (Lori) of West Jordan, UT. He is also survived by 17 grandchildren and 14 great-grandchildren. He is preceded in death by his wife Geri. The funeral services will be held Friday May 30th at 11:00 am at 420 East Stokes (13540 South), Draper, UT 84020. Viewings will be held on Thursday, May 29th from 6:00-8:00 pm and on Friday from 10:00-10:45 am at the church listed above prior to the funeral. Interment will be at Larkin Sunset Gardens. Condolences may be sent to the family at www.serenicarefuneralhome.com

Henry Lloyd Goldsmith 1929 &#8211; 2014 A Legacy of Integrity, Obedience, and Honor Our beloved father, grandfather, and great-grandfather passed away on May 20, 2014, in Salt Lake City, UT after suffering a heart attack. Henry was born in... View Obituary & Service Information

The family of Henry Lloyd Goldsmith created this Life Tributes page to make it easy to share your memories.