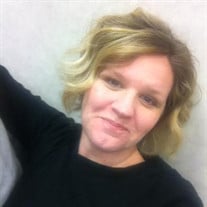 Holly Brown Orton, wife, mother, daughter, aunt and friend, returned home to the arms of her Heavenly Father and her earthly father, July 2, 2015, after a courageous fight with colon cancer. Born April 24, 1976 in Murray, Utah to Kirk Brown and Ruth Attebery. On January 17, 1997, Holly married her best friend, Jeromy Orton, in the Salt Lake temple. They started their family quickly and were blessed with four amazing children, Abigail, Zane, Drew and Ellie. Her children were the light of her life. Holly had many passions in life, but none greater than her children. She lived each day for them. She loved watching and being a part of whatever it was they were doing. She spent countless hours at school events, sporting events, and dance recitals. If there was a time where events overlapped, Holly would make sure that another family member was there to support her child, so they never had to be there alone. Growing up watching her dad officiate, and her brothers play multiple sports, Holly developed a love for many sports. She played soccer and softball at Hunter High School. Watching and going to games with her dad and grandpa, she also developed a love for BYU football. She was so excited to be chosen as one of Thursday’s Hero’s by the BYU football team for the 2014 season. She thoroughly enjoyed the opportunity to watch practice, meet the team and coaches, and to tour the football facilities. She cherished the signed football and flag she was given by the team and was honored to sign the flag that is taken out onto the field each game. Holly and Jeromy shared many interests including traveling, sports, and especially BYU football. They would often combine their love of traveling and love of sports together and travel to locations where they could go to a Major League Baseball game. Over the past few years, they tried to travel to one BYU road game each year. Making these road trips were special for the whole family and something that they will never forget. In the past few years, Holly developed a love and skill for quilting. She tried to make quilts for birthdays and newborn nieces and nephews. Unfortunately she wasn’t able to work on them in the past year and many have gone unfinished. Having gone to Cosmetology school, Holly spent nearly 20 years “doing hair.” She was very good at what she did and it showed by the many long time clients she had, as she would move from one salon to another, some even coming from out of state to have Holly cut, color and style their hair. She loved the social side of her work, often referring to her clients as her friends, Holly developed a love for each one and many lasting friendships were born in the salon. When she had to stop working, she didn’t miss the work as much as she missed seeing and talking to all of her friends. Holly was a wonderful example of service to those around her. Having the opportunity to talk to so many people through her work, also gave her an opportunity to serve them. Many times Holly would listen to people’s stories, hear their struggles, and know there was something she could do to brighten their day. She was often impressed to reach out to those in need, whether it was just a phone call to see how they were doing or taking them a treat and visiting with them, or taking someone dinner, Holly would not hesitate to serve others. In June of 2014, the tables turned, and Holly became the one in need of the help and service from others. After feeling sick for a while, Holly was diagnosed with stage IV colon cancer. Over the next year Holly endured so many things that no one should ever have to go through. Over 30 rounds of chemotherapy treatments, 12 rounds of radiation treatments, two complete bowel obstructions, and several other problems and complications. None of these hurdles could keep her down. Holly fought this nasty disease with everything she had and with optimism each day. Only her family would ever see the rare moments of weakness and despair caused by the pain of having cancer. Holly was an example of strength to all around her. Even in the end, she continued to fight. Jeromy and the kids would like to thank everyone who has shown their love and support to Holly and their family during this journey. The love of their family, friends and neighbors was amazing. They would also like to thank the wonderful people at the Huntsman Cancer Institute, especially Dr. Glyn Gilcrease and his nurse, Jamie Fendler, and the wonderful people with IHC Hospice services. Holly is survived by her best friend and husband, Jeromy, their children, Abigail, Zane, Drew, and Ellie, her mom, Ruth Brown, her brothers and sisters, Stephanie (Justin) Gardner, Lindseay Brown, Kirk “Chip” (Danelle) Brown, Kenny (Krista) Brown, father and mother-in-law Royden and Debbie Orton, brothers and sisters-in-law Tony (Angie) Orton, Justin (Michelle) Orton, Tiffany (Jacob) Whetstone, Andrew (Brandi) Orton and Trisha (Jared) Richards, 22 nieces and nephews and many other extended family members and friends. Holly was preceded in death by her father, Kirk Brown, and a nephew, Nathan Orton. Funeral Services for Holly will be Wednesday, July 8, 2015, at 11:00 am at the Herriman Mountain View Stake Center, 14550 S. Juniper Crest Rd., Herriman. Family and friends can call at a visitation at the church on Tuesday, July 7th from 6:00–8:00 in the evening and from 9:30 – 10:45, prior to the services. Interment in the Herriman City Cemetery. *Holly’s obituary will only be posted here on Facebook and on the Serenity Funeral Home website (www.serenityfhs.com). Please feel free to share with anyone who might be interested in knowing this information.

The family of Holly Brown Orton created this Life Tributes page to make it easy to share your memories.