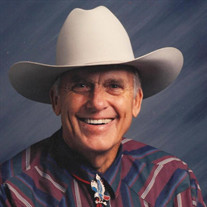 Howard A. Hanks Howard Augustin Hanks, our sweet husband, father and grandfather was called back to the Father who gave him life, the evening of July 16, 2015, at home, from cause’s incident to age and a worn out body from a life of hard and fruitful labor. He left us with his boots on and Stetson intact! Howard was born September 16, 1923 in Burley, Idaho, in the “tar paper shack”, the fourth of eight children born to Augustin Leo and Olive Jane Abrams Hanks. After graduation from Burley High School, he served honorably in the Philippines during World War II in the Army Veterinary Service under Gen. Douglas MacArthur. After the service he completed his education in Animal Husbandry at Brigham Young University and married Lola Isaacson in 1949 and returned to Idaho to ranch and farm on Rupert’s north side. Howard raised registered Angus cattle (Rose View Angus Ranch) and was the President of the Idaho Angus and Western States Angus Associations for a number of years. Howard and Lola are the parents of Howard Stanley (Evelyn) Hanks, Robyn Michelle Hanks and Bjoern-Erik Hartsfvang (Stuart Stuple). They divorced in 1968. Howard married Melba Perry Barrett in 1973 and became a second father to her son Kenyon Ray (Pam) Barrett. Howard was also very pleased to be a father to their granddaughter Dusti Jade (Jordan) Moon. In 1974 he sold his cattle and grew row crops until his retirement in 1985 and eventually they sold the farm and moved to their property in Acequia, where Howard could focus on his beloved orchard. He was a Master Gardener for Minidoka County Extension Service and was well known for his hand-pressed apple cider that he freely shared with friends and neighbors. Howard was well known for his beautiful baritone voice and he sang in a variety of venues in the western states, including a number of barbershop choruses and quartets in the Mini-Cassia area. He especially enjoyed reciting the poetry he learned as a youth to anyone who would listen. Howard was a faithful member of the LDS Church and had a firm testimony of the Gospel of Jesus Christ, the Plan of Salvation and of the eternal family. His family was always his greatest joy and his family loved him back. Howard is survived by his wife, Melba, all 5 of his children and 47 grands and great-grands. He is also survived by sisters Barbara Graham (Boise), Helen Dastrup (Logan) and brother David Hanks (Burley). He was preceded in death by his parents, sisters Marian Harris and Beth Clark and brothers Morgan and Richard Hanks. Funeral services will be held at the Acequia LDS Chapel on Wednesday, July 22, 2015, at 2:00 pm. A viewing will be held at 11:00 am prior to the services. Interment will be at the Pleasant View Cemetery in Burley. Funeral services under the direction of Serenity Funeral Home of Utah 801-255-2801.

Howard A. Hanks Howard Augustin Hanks, our sweet husband, father and grandfather was called back to the Father who gave him life, the evening of July 16, 2015, at home, from cause&#8217;s incident to age and a worn out body from a life of hard... View Obituary & Service Information

The family of Howard A. Hanks created this Life Tributes page to make it easy to share your memories.