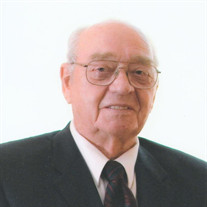 Howard Bennie Larsen passed away peacefully on May 9, 2019 surrounded by family. He was born November 18, 1931 in North Ogden, Utah to Jetsina Ruth Meenderink Larsen and Edward Christian Larsen, and grew up with his three living siblings. He married the love of his life, Lauretta Atkisson Larsen, on August 21, 1956 in the Salt Lake City Temple. Together they raised four children: Karen, Janet, Ted & Erik. He received his undergraduate degree from Weber College, and subsequently earned a Master of Science in Psychology at Brigham Young University (1958). He was active in student government and chairman of the Student Honor Council. Howard went on to earn a PhD in Educational Psychology at Stanford University. Howard interrupted his undergraduate studies to serve an LDS mission in the Norway, Oslo mission for a period of over 2 and a half years. Dr. Larsen worked as a professor in the Higher Education Department at the University of Washington in Seattle. The family moved to Riverside, CA where Howard was named Vice President of Academic Affairs at Riverside City College. Later, he was made the president of Victor Valley College in Victorville, CA, and then president of Chabot College, with campuses in Hayward and Livermore, CA. Howard retired in 1994 and moved to Alpine, UT where he was a cherished member of the Hillside Second Ward. Howard spent his life loving and caring for others. Family always came first, including taking on the responsibility to help raise some of his grandchildren. He taught his family and those around him compassion, unconditional love, and forgiveness. He instilled a love of education and learning in his children and grandchildren, and always encouraged them to do their very best; all the while waiting with open arms when they would fall/fail. He had a wonderful sense of humor, and enjoyed joking with and teasing those around him. He took his civic responsibilities seriously, and encouraged his family to be engaged in change within their communities. He lived a long and full life, therefore he was preceded in death by many loved ones including his wife of nearly 59 years, Lauretta in 2015. He is survived by his loving sister, Janet Butz, his 4 children, 14 energetic grandchildren and 8.5 even more energetic great grandchildren. Funeral services will be held on Saturday May 18th, at the Hillside Chapel, located at 676 N Eagle View Dr, Alpine, UT 84004, beginning with a public visitation at 10:00 AM, followed by the service at 11:00 AM. Burial will occur at 3:00 PM at the Ogden City Cemetery, located at 1875 Monroe Blvd, Ogden, Utah. For a full tribute, please visit Serenity Funeral Home: http://www.serenityfhs.com

Howard Bennie Larsen passed away peacefully on May 9, 2019 surrounded by family. He was born November 18, 1931 in North Ogden, Utah to Jetsina Ruth Meenderink Larsen and Edward Christian Larsen, and grew up with his three living siblings.... View Obituary & Service Information

The family of Howard Bennie Larsen created this Life Tributes page to make it easy to share your memories.

Howard Bennie Larsen passed away peacefully on May 9, 2019 surrounded...