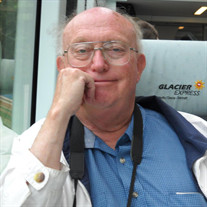 Howard Lee Watson Jr. Howard Lee Watson Jr was born in Tuscaloosa, Alabama on December 8, 1938. He was the only child of Virginia Atkinson and Howard Lee Watson Sr. He grew up in Arlington Heights, Illinois near Chicago. He remembered the end of World War II. He was riding his tricycle when he heard the announcement of the end of the war. He was very proud to be able to share the news with everyone who passed by. Lee was very interested in science. He and his friends did all sorts of chemistry experiments in his parents' basement. Lee went to Northwestern University for his undergraduate education. He graduated with a degree in Mathematics. He was recruited for brand new graduate program in Physics at the University of California, San Diego. He earned a masters and doctorate there. While in San Diego, he met and married Mary Anderson. This union produced a son, Jeffrey Elam Watson. After graduate school, they moved to Massachusetts where Lee taught undergraduate physics at Amherst College while Mary pursued further education. Lee did a year of study at the Institute of Advanced Studies at Princeton, University. When Lee failed to get tenure at Amherst College, he worked for a year for the Environmental Defense Fund as they were fighting the Alaskan Pipeline. At this point his marriage to Mary fell apart. Lee worked with many attorneys in EDF and became interested in the study of Law. He married Erica Schuster and they moved to the Oakland California. Erica studied medicine while Lee attended law school at the University of California at Berkeley. After graduation, they moved to Los Angeles, California where he began the practice of law in the area of litigation. There Erica and Lee welcomed a daughter, Jennifer Gayle Watson. Lee and Erica split up. Lee had primary custody of their daughter, Jennifer. In 1984, Lee met and married Alice Kay Silver. They had a daughter Amanda Lee Watson. Lee and Alice reared a family of kids: his, hers and ours. He continued the practice of law until he retired in 2012. He had many different clients such as IBM and the Los Angeles Clippers Lee joined the Church of Jesus Christ of Latter Day Saints in 1983. He served in various capacities such as Scout Master, High Councilor, Employment Specialist, Ward Clerk and teacher. Lee was an avid backpacker and hiker. He loved hiking in the Sierras. He also enjoyed travel. He visited all fifty states and several foreign countries such as Kenya, the Seychelles, Greece, the Caribbean, Mexico, France, England, Scotland, Germany, the Netherlands and Switzerland. He died peacefully in his sleep August 24, 2012 after a long illness. He had a chance to say good-bye to loved ones before he passed. Howard Lee Watson is survived by his wife, Alice, children Jeffrey Elam Watson, Jennifer Watson Kleinbaum (Scott), Amanda Watson Gilbert (Nick), three stepchildren Carl Anderson (Janet), Andrea Anderson, Chandra Anderson Kingsford (Dorman) 8 grandchildren and 3 step-grandchildren. Services will be held at the Juniper Bend Chapel on September 1, 2021 at 11:00 a.m. There will be a visitation at 10 am that same morning.

The family of Howard Lee Watson created this Life Tributes page to make it easy to share your memories.