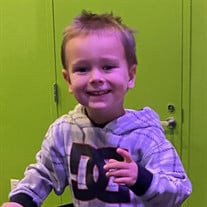 Hunter's upcoming birth was heralded by older brother, Tyler, from Disneyland in California. Tyler proudly wore a shirt that proclaimed “I am going to be a big brother”. In Tyler’s hand was a big white balloon with a blue Mickey Mouse balloon inside. Hunter Charlie Jackson born August 01, 2018. He joined three older sisters: Emily, Lexi and Carly, and three older brothers: Xander, Ryker and Tyler. As well as half siblings Kilee and Curtis. Hunter had brown eyes and fluffy brown hair, and Dad’s dimples. Hunter was proud when he got to announce that he was going to be a big brother. Younger brother Parker, and later Kyler, joined the Jackson clan. When Hunter was happy, he smiled with this whole body. When he was sad, a thunder cloud followed him everywhere and he voiced his grumpiness to the world. Turning 3 was special for him because he could now attend Early Learning Essentials Preschool in Saratoga Springs. He loved all of his teachers, and the children in his class. He couldn't leave preschool without giving his teachers a hug goodbye. Hunter's family often fosters kittens for a cat rescue. Hunter took his responsibility to socialize the kittens and get them used to being around people seriously. He would herd the kittens to their kennel at night time and make sure they were out in the morning. Hunter would spend many hours petting or playing with the kittens. All the Jackson children were happy when their kittens were able to be adopted by their fur-ever families. Hunter especially liked balls that bounced and things with wheels. He was always arranging cars and trucks and was very fond of Monster Trucks. He loved the truck, Hercules built by The Diesel Brothers. Hunter learned that he loved camping and riding on ATV's. Hunter learned that he loved it so much that he even became buddies with his former "frenemy," McKay Littlewood. Becoming buddies so much that Hunter even said his name is 'Hunter Mckay'! Hunter liked to play with phones. He knew the magic combination that would call Grandma. He would tell her about the weather, what color his socks were, who was having a birthday, and what happened at school that day. Sometimes Hunter would tell a big tale just to see if Grandma was listening or to see if he could trick her into believing him. Sometimes he would turn off the phone, just so he could push the buttons and call again. Hunter liked to ride along to drop Emily off at Cedar Valley Stables so he could feed his favorite horse, Shawnee, a carrot, and go for a ride or just sit on his back. It was on one of these trips that Hunter met Odin Ratliff. Odin came out and said, “Hi! Do you want to be friends? Come play with me.” After that, they looked forward to meeting at the barn, and often played trucks in the corral. Monday, May 2nd, 2022 was one of those joyful play dates that turned tragic for the best buddies. Hunter, for such a small boy, you have made a huge impact on many people. There will be an empty space at family events and gatherings that cannot be filled. We are better for having spent a few moments with you. We know you have returned to Heavenly Father, and that you are enjoying the company of many family members who have passed on before you. We ask that you make a little heavenly mischief once in a while and kick a little cloud around or just send us a hug to remind us that we can all be together again. See you later, alligator. We will always love you.

Hunter's upcoming birth was heralded by older brother, Tyler, from Disneyland in California. Tyler proudly wore a shirt that proclaimed &#8220;I am going to be a big brother&#8221;. In Tyler&#8217;s hand was a big white balloon with a blue... View Obituary & Service Information

The family of Hunter Charlie Jackson created this Life Tributes page to make it easy to share your memories.