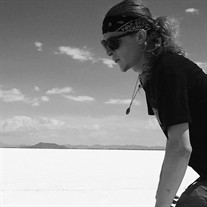 Ian Alexander Anderson passed away suddenly on January 13, 2018 at the age of 24. Ian joins his heroes in the afterlife, Ray Boyett Jr. (Raybo), Jimmy Anderson (PawPaw), and Al White (Papa). Following a hit and run accident in September 2017, Ian was recovering from a traumatic brain injury, and had undergone two reconstructive surgeries prior to his passing. Ian was born January 27, 1993, the son of Brandy Boyett and Markus Anderson. Ian was a kind and funny child. He made all of us laugh, and was the joy of our lives. An easy friend to many, as a teen Ian was often witnessed on school surveillance cameras pulling harmless, yet hilarious pranks on his friends. Ian learned to play guitar, and with several friends, formed the local band Mauler. Later Ian performed acoustic solo shows, and was continually working on new music. Ian enjoyed his work as an installer for Technaglass in Pleasant Grove, Utah, and loved his coworkers. Ian was a peacemaker, known to calm a negative situation, stand up for others, and bring peace to those around him. He told the stories of his life to relate to others, gave incredibly insightful advice, and was always easy with an, “I love you, man.” Ian is survived by his mother Brandy Boyett (Steve Ballingham), his father Markus Anderson (Tamara Anderson), sisters Tatum Sorensen and Ariel Anderson, many step-siblings, family members, friends, and his best friend- his dog Hank. As Ian walks into another existence, we hold him in our hearts as we adventure forward into a world that will never seem quite as bright as it was when he was with us, knowing he is at peace and well loved. Rest easy, man. You know we love you. A celebration of Ian’s life will be held January 27, 2018 from 12:00 PM – 4:00 PM at London Studios, 2320 E Murray Holladay Rd., Holladay, Utah 84117.

The family of Ian Anderson created this Life Tributes page to make it easy to share your memories.