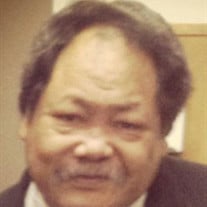 Iki Talaiasi Tulimafua, 63, passed away peacefully at home in Salt Lake City, UT surrounded by his family on April 15, 2014. He was born December 28, 1950 in Koulo Ha’apai, Tonga. He married and was sealed to the love of his life, Paea Helotu (‘Ita’aehau) Tulimafua on June 24, 1977 in the Los Angeles LDS Temple. He was a Liahona High School graduate of 1971. He also graduated from BYU-Hawaii in 1994. He then became a teacher of the Tongan language, English as a second language, and Social Studies. He was also a correction officer for the state of Utah. He loved music and had translated many of the hymns of the LDS church from English to Tongan. He also composed some Tongan music and loved playing various brass instruments for the PCC Brass Band in Laie, HI and the Liahona Marching Band of Utah. He is preceded in death by his Mother, Siutaisa Mataele and Father, Talaiasi Tulimafua, Brother, Koniseti Tulimafua, Brother, Viliami Tulimafua, and Sister, Milika Fonokalafi. He is survived by his beloved wife, Paea Helotu (‘Ita’aehau) Tulimafua, Daughter, Sela Leolani Latu (Sateki Malani Latu) and Son, Viliami Hawaiiloa Tulimafua (Anya Vanesa (Pasi) Tulimafua) and Grand-daughter, Paea Helotu-Leolani Tulimafua. Also by his surviving brothers and sisters, Sela, Faiva, Tangkina, Pita, Lineti, Mele, Folauhola, and Piula. Along with many nieces and nephews. His services will be held on Saturday, April 19, 2014 at the LDS Chapel on 660 North Redwood Road, Salt Lake City, UT 84116. From 7-10:30am is his viewing and funeral services will be from 11am-Noon. Interment will be the Salt Lake City Cemetery. Please share memories and condolences at www.serenicarefuneralhome.com. Services under the direction of Peni Malohifo'ou of Serenity Funeral Home

Iki Talaiasi Tulimafua, 63, passed away peacefully at home in Salt Lake City, UT surrounded by his family on April 15, 2014. He was born December 28, 1950 in Koulo Ha&#8217;apai, Tonga. He married and was sealed to the love of his life, Paea... View Obituary & Service Information

The family of Iki Talaiasi Tulimafua created this Life Tributes page to make it easy to share your memories.

Iki Talaiasi Tulimafua, 63, passed away peacefully at home in...