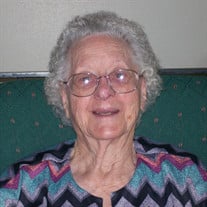 Ione Elva Painter Palmer August 25, 1923 – January 20, 2019 Our beloved Mother, Grandmother, Great-Grandmother, and Great Great-Grandmother passed away in her home on January 20, 2019 at 2:17 am, at the age of 95. Her loving son, Scott, by her side. Ione was born on August 25, 1923 in Biola, California to William and Minnie Painter. Her family moved to Eureka, Utah where she lived and graduated from Tintic High School. She met and married Leo Palmer from Goshen, Utah on March 20, 1943 while he was home on leave from the Army. Together they had three children. Barton, David, and Scott whom she loved and nurtured throughout her life. Ione and Leo moved to Dugway, Utah in the early 1950’s where they lived until Leo retired. During their time in Dugway, she worked at the school lunch, Dugway PX, and the commissary. After Leo retired, they moved to Lehi, Utah. They were able to travel around the US, Canada, and Mexico. She was a product of the Great Depression and was frugal to the end. Ione is proceeded in death by her parents, husband, and son David. She is survived by her sons, Barton and Scott (Lorna) Palmer, Granddaughter Theresa Palmer, Grandsons Brett Palmer, Scott Palmer II, Trevor and Jason Palmer, 4 Step-Grandchildren, Great Granddaughters Kaylynne Crane and Ciera Palmer, Great Grandson Greyson Palmer, 12 additional grandchildren, and one great great grandson Bryton Williams. The family would like to thank Danville Support Services and her caretaker, Salome, who took care of mom from the beginning. Additionally, to Elevation Hospice and their caring staff. Funeral Services will be held at 11:00 am on Saturday, January 26, 2019 at the Lehi 11th Ward located at 880 North 700 East in Lehi, Utah. A viewing will be held 1 hour prior to the service. Interment will be on Monday, January 28, 2019 at 1:30 PM in the Veteran’s Memorial Cemetery located at 17111 South 1700 West, Bluffdale, Utah.

The family of Ione Elva Palmer created this Life Tributes page to make it easy to share your memories.