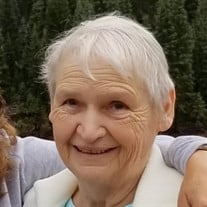 Our dear mother, grandmother, sister, and friend, Irene Bell Swenson passed from this life on December 11, 2017, in her home in West Valley City, Utah. She passed peacefully surrounded by family. Irene was born on May 18, 1941, in Standardville, Carbon County, Utah, to Zoram Bonanza and Emily Louese Bell. She was a twin, and the twelfth of twelve children. She was married March 23, 1960 to John Rulon Swenson, of whom preceded her in death. She was sealed for time and all eternity, to John, in the Salt Lake Temple, seven years later. She grew up in Clearfield and graduated from Davis High School. About a year after marriage, they were transferred to Lackland AFB in Texas; then transferred to Okinawa Japan. John got out of the military and they moved back to Utah and lived in the Clearfield area until they moved to Dugway, Utah. She loved Dugway and worked her way up to manager at the Dugway Theater. When her husband, John died in 1985, she moved to Sandy. She went to Wasatch Career Institute for secretarial studies. She got a job with the Church of Jesus Christ of Latter Day Saints with the Family Research department, which she eventually retired from. She has lived in West Valley for over twenty years, where she remained until her death. She served in many callings for the church, including many years as a Primary teacher and a Relief Society teacher. She loved serving in the church and had a strong testimony. She is survived by her seven children, Cathy (Adam) Suhajda, John Swenson, Jody Hurst, Sherry (Eric) Parry, Steven (Melanie) Swenson, Christopher (Michelle) Swenson, and Kimberly (Terry) Teramoto; two sisters, Shirley Parker and Louann Anderson; Sister-in-law, Lynne (Pat) Whitt; twenty-seven grandchildren, eighteen great-grandchildren and many nieces and nephews. She is preceded in death by her husband, John, both parents, all four of her brothers, five sisters, one grandchild, and two great grandchildren. Funeral Services will be held Saturday, December 16, 2017 at 4444 Early Duke Street, West Valley City, Utah 84120 at 11:00 am. Visitation with family will be beforehand from 10:00-10:45. Interment will be at the Clearfield City Cemetery after funeral.

Our dear mother, grandmother, sister, and friend, Irene Bell Swenson passed from this life on December 11, 2017, in her home in West Valley City, Utah. She passed peacefully surrounded by family. Irene was born on May 18, 1941, in Standardville,... View Obituary & Service Information

The family of Irene Bell Swenson created this Life Tributes page to make it easy to share your memories.