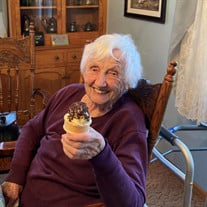 Isabelle Marie Boos, 100, of Julian NE, passed away on June 16, 2021, while on vacation in Utah. She traveled with her son Kevin Boos and his family from Nebraska to Utah to attend a family reunion and celebration of life for her daughter- in-law Jo Ann Boos. She became ill the next day and was unable to return home to Nebraska. She was cared for by her children and other family members at her granddaughter Cora Eike’s home in Bluffdale, Utah where she passed away peacefully 4 days later. Isabelle was born in Urbank, Minnesota on January 31, 1921, to John Thomas and Rosalie (Korkowski) Wagner. Her mother passed away when Isabelle was 9 months old at which time she went to live with her grandparents. She graduated from Hartford High School and then married Joseph Leo Boos when he returned from active duty in WW2. Isabelle was a devoted wife and mother. Isabelle and Joe raised their family of 5 children beginning in Hartford, Wisconsin. They then moved to Waukesha, WI and Racine, WI before moving to Pocatello, Idaho in 1969. In 1990 Joe and Isabelle moved to Meridian ID. After Joe’s passing in 2004, Isabelle remained in her Meridian home until 2015 when she moved to Julian, NE to live with her son Kevin Boos and his wife Janet and their family. Isabelle was a lifelong member of the Catholic Church most recently at St. Bernard’s Parish in Julian, Nebraska. When she lived in Meridian, Idaho, she was a member of Holy Apostles Parish. She was an active member of the Idaho Council of Catholic Women, Catholic Daughters of America, and the Knights of Columbus Auxiliary as well as numerous community and charitable organizations. In Idaho, she and Joe sewed, quilted, and donated thousands of baby blankets throughout the years to Birthright for unwed mothers. In addition, she sewed countless teddy bears for hospitalized children and prepared funeral dinners for grieving families. She was also a volunteer at St. Luke’s Auxiliary Legacy Hospice and many other community organizations. Isabelle was an excellent homemaker and do-it-yourselfer. She had a strong work ethic and was a role model to her children and others. Her home and yard were always tidy and attractive. She loved interior decorating, refinishing antiques, reupholstering furniture, ceramics, and tole painting. Isabelle was a talented seamstress for over 60 years. She owned and operated a bridal shop in her home where she designed and created custom wedding dresses, ornate head pieces, and attire for the entire bridal party. She specialized in recreating dresses from bridal magazine photographs and was phenomenally successful in this endeavor. She was also incredibly talented as a cook and baker. For many years she was employed in the field of food service as a cook, baker, manager, recipe developer and instructor in culinary arts. Isabelle was also a lover of nature and shared this passion with her children. She camped, skied, floated rivers, and spent many hours in her flower gardens. She actively pursued gardening until the age of 98. Her gardens were the envy of her neighbors, and she was always willing to share advice and plant starts. In Julian, Nebraska, a village of 51 residents and her last home, she was instrumental in community fund raising. She donated funds along with others to restore a historic gas station and other buildings and structures in the village. Isabelle Park, across the street from her home, was created in her honor. Isabelle is survived by all 5 of her children. They are Charles Boos (Jo Ann, deceased), of Nampa, ID, Michael Boos (Leslie), of Blair, NE, Mary Jo Marshall (Ted), of Salt Lake City, UT, Kevin Boos (Janet), of Julian, NE, and Nolene Weaver (Tony), of Grangeville, ID. Isabelle is also survived by 15 Grandchildren, 18 Great Grandchildren, and 6 Great, Great Grandchildren. In addition to the death of her husband Joe on September 25, 2004, she was preceded in death by a granddaughter Joelle Boos in 1989 and her daughter-in-law Jo Ann Boos in 2020. Isabelle was a twin and her twin sister Annabelle died at birth. Funeral services will be on Thursday July 22, 2021, at Holy Apostles Catholic Church in Meridian, Idaho. Adoration and recitation of the Rosary at 10:00 a.m. and High Mass at 11:00 a.m. Burial next to her husband Joe at the Idaho Veterans Cemetery in Boise ID will follow.

Isabelle Marie Boos, 100, of Julian NE, passed away on June 16, 2021, while on vacation in Utah. She traveled with her son Kevin Boos and his family from Nebraska to Utah to attend a family reunion and celebration of life for her daughter-... View Obituary & Service Information

The family of Isabelle M Boos created this Life Tributes page to make it easy to share your memories.