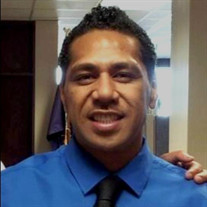 Isoa Hopoi Blake (38), passed away on December 14, 2021 in Salt Lake City, Utah. Isoa, known by many as Soa or Issac, was born on June 23, 1983 in Glendale, Utah to Latahemo’oni and Tevita Blake. Isoa attended school in Salt Lake City, UT. At a young age, he discovered a fascination with the engineering of automobiles, which allowed him to harness and hone in on his skills as an automobile mechanic. Isoa learned and mastered the trade of home construction. He had the ability to construct a house from the ground up. Houses were not the capacity of his construction; his charm, humor, and wit were extremely contagious, and could build anyone around him. He loved singing, dancing, and had a talent of turning the most insufferable, painful situations into an endless cackling battle. His work ethic remains unmatched, and his rambunctious laugh will be sorely missed. Survived by: Latahemo’oni Blake, Tevita Blake Sr. (Parents), Mariah Blake (Daughter), Nina Toledo (Former Wife) Alekisanita Blake, Uikelotu Blake (Brother, Sister-in-Law), Akanesi Blake (Sister), Shemnon Blake, Brian Morris (Brother, Brother-in Law), Tevita Blake (Brother) Isoa was loved and survived by many cousins, who he considered as siblings; as well as many aunts, uncles, nieces, and nephews. Please share memories and condolences at www,serenityfhs.com

The family of Isoa Hopoi Blake created this Life Tributes page to make it easy to share your memories.