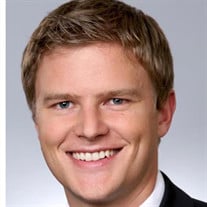 Jacob Clyde Robertson was born on April 4, 1979 in Provo, Utah, the son of John Steven Robertson Sr. and Barbara Clyde; he died on April 23, 2016 in Phoenix, Arizona (glioblastoma multiforme). The intervening thirty-seven years have been full and eventful. Foremost was his marriage to Jordan Romney on May 8, 2004 in the Mt. Timpanogos Temple. Together, they gave life to Lauren (10), to Ellie (8), to Ada (6) and to Thomas (2). From the earliest age, Jacob loved the physicality and challenge of sports: baseball, football, basketball, tennis, lacrosse, and golf. He was an ardent, lifelong BYU sports fan, football in particular. Jacob was a dedicated scholar in high school (Orem High), in College (B.A., Political Science, Brigham Young University) and in his post graduate studies (Doctor of Jurisprudence, University of Utah, Law Review Editor). His skill as a researcher made him a successful attorney (nine years at the Phoenix law firm, Perkins Coie), specializing in corporate litigation and contributing to many significant cases. Jacob was a man of resolute character, an accomplished man who loved and served others. His LDS Church mission brought him to Madrid, Spain, where among other assignments, he served seven months as Branch President in Cuenca. Using his skills as a lawyer, Jacob dedicated significant pro bono hours, assisting those who had no legal recourse. He served on the board of Raising Special Kids. He coached youth soccer. His greatest service, however, was accomplished within his home, where in gratitude and love, he served his wife and children. “This is the generation that seek thy face, O Jacob. Selah” (Psalms 24:6). As per Psalms 24:3-5, Jacob Clyde Robertson has now ascended into the hill of the Lord, and at this moment, he stands in a holy place, in His holy place. Now, as before, his is a life of clean hands and a pure heart. We, with so many others, love him and still seek his face. Jacob is survived by his wife (Jordan Patricia Romney) and children (Lauren Yevon, Ellie Barbara, Ada Claire, Thomas Jacob); by his father and mother: John Steven Robertson, Sr. and Barbara Clyde Robertson; by his siblings: John Steven, Jr., John Christian (Sarah), James Vernon (Jenny), Kirsten Clayton (Bryan); Jennifer Ralston (Taylor), Matthew Clyde (Jessica); by his mother- and father-in-law: Vernon Frederick “Rick” Romney, Yevon Griffin Romney, and by their children Mary Claire Hatch (Richard), Vernon David Romney (Courtney), Andrew Earl Romney (Chelsea). He was preceded in death by his sister (Portia Anne); by his paternal grandparents (Ralph Vernon and Gwendolyn Stevens Robertson), and by his maternal grandparents (Blaine Palfreyman and Louise Christiansen Clyde). Funeral services will be held on Saturday, April 30, 2016 at 11:00 am at the LDS Paradise Valley Stake Center, 3601 East Shea Boulevard, Phoenix, AZ. Friends may visit with the family Friday evening from 6:00-8:00 pm at the same address, or Saturday morning from 10:00-10:45 am prior to the funeral services. A memorial service will be held on Tuesday, May 3, 2016 at 11:00 am at the Heather Ridge Stake Center, 450 East 2000 North, Orem, UT. Friends may visit with the family from 10:00 to 10:45 am prior to the service. Interment will be in the Eastlawn Memorial Hills Cemetery, 4800 N. 650 East, Provo, UT. In lieu of flowers you may donate to the Robertson Children’s Fund at any branch of Mountain America Credit Union in person or by phone at 1-800-310-6228, option 0. Funeral arrangements under the direction of Regency Mortuary, 9850 W. Thunderbird Blvd, Sun City, AZ 623-875-7500 or Serenity Funeral Home, 12278 S. Lone Peak Parkway, Draper, UT 801-255-2801 www.serenityfhs.com

Jacob Clyde Robertson was born on April 4, 1979 in Provo, Utah, the son of John Steven Robertson Sr. and Barbara Clyde; he died on April 23, 2016 in Phoenix, Arizona (glioblastoma multiforme). The intervening thirty-seven years have been full... View Obituary & Service Information

The family of Jacob Clyde Robertson created this Life Tributes page to make it easy to share your memories.