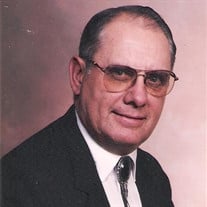 James Albert Claunch, 82, passed away peacefully on May 17, 2019, in Orem, Utah. He was born on May 23, 1936, to Birdie Fae Cook, and Floyd Leon Claunch. He married the love of his life, Karma Jensen, on September 4, 1959, at the home of Oliver and Emily Jensen in Manassa, Colorado. Their marriage was later solemnized in the Mesa Arizona Temple of The Church of Jesus Christ of Latter-Day Saints, on December 7, 1960. James loved to hunt and fish as a boy and young man and spent a lot of time camping and close to nature. He attended school in the Carmel School District and then later in La Jara, Colorado, and graduated from La Jara High School, in 1954. He enlisted in the Air Force after high school and because of an injury was medically discharged. He worked on the D &RG Western Railroad as a young man and also ran the standard gauge diesel freight train from Alamosa, CO to La Veta, CO. He also fired the passenger train several times from Chama, NM to Silverton, CO. After he and Karma were married, he began working on his Father-in-law’s cattle ranch. He raised cows and farmed the land. In 1977 he attended school to get his Locksmith license. He and his family were also custodians for the church in which he served. In 1980 he and his wife opened and operated the Manassa True Value Hardware Store. They were able to fill the hardware needs of the community for several years, until 1988 when they sold the store. He then worked at the La Jara Trading Post where he had his locksmith business and also small engine repair. In 1989 he moved the family to Provo, UT and began working for the Daily Herald and re-started his locksmith business, where he worked until he retired in 2012. James was a member of the Manassa Saddle Club, and helped with the Manassa Pioneer Days Celebration. He was also a member of the Central Conejos Fire Protection District and served as a volunteer fireman for The Manassa Volunteer Fire Department for 22 years. He spent most of that time as the Fire Chief, and in 1984 he was honored by the district because of his dedication to the department. He was instrumental in helping the Town of Manassa get a new firehouse and a new fire engine. James was a member of the Church of Jesus Christ of Latter-Day Saints. He had a testimony of the Gospel and loved his Father in Heaven and his Savior Jesus Christ. During his life he fulfilled many callings. He was a Ward Clerk, Financial Clerk, Elders Quorum President, 2nd Counselor in the Bishopric, Member of the High Council, and in 1984 he was made Bishop of the Manassa 1st Ward, as well as numerous home teaching and service assignments. In 2005 He and Karma were called to serve a 4-month mission for the Church of Jesus Christ of Latter-Day Saints in Nauvoo, Illinois. They were assigned to help prepare meals for BYU Students who study abroad, cast and crew of the Nauvoo LDS Pageant and youth groups who came from all over the United States to attend youth conferences in Nauvoo. In addition, he attended many youth camps and ward activities, where he was able to serve members of the Manassa and Provo communities. James and Karma liked to travel and visited many places during their marriage. In 2009, James and Karma celebrated their 50th wedding anniversary with a cruise to Hawaii. James loved spending time with family and he loved to work with his hands and made many things for his family. He built a camper when his children were little and they took several trips. He took them on a pack trip to the mountains and spent hours enjoying the outdoors, camping and hunting and fishing with them. He and his siblings and their families were able to hold family reunions and the time he spent at those reunions was some of the best times of his life. He lived a life of service and honor and he will be dearly missed by all who knew him. James is survived by his wife, Karma, of the family home in Provo, his children, David (Monica) Claunch of Lindon, UT, Jeffrey (Mindy) Claunch of Payson, UT, Jennifer Ruff, of Manassa, CO, Elizabeth Sowards, of Provo, UT, Jon (Claire) Claunch, of Erlanger, KY, Erin (Brandon) Bodily, of Provo, UT, and Floyd (Heather) Claunch, of Riverton, UT; a brother, Bob (Leona) Claunch, of Alamosa, CO, and a sister, Sara (Buddy) Burnett, of Orlando, FL. He is also survived by 30 grandchildren, and 19 great-grandchildren, as well as numerous nieces and nephews and cousins. He is preceded in death by his Father, Floyd Leon Claunch, his mother, Birdie Fae Claunch-Kelly, his sisters, Joyce Morgan-Layton, Nancy Morgan, two Sons-in-Law, Steven R. Sowards, and Dale A. Ruff, and two grandchildren, Danika Claunch and Dalen Ruff. Funeral services will be held at the Church of Jesus Christ of Latter-Day Saints, 1555 N. 1350 W. in Provo, UT, on May 23, 2019 at 11:00 am. A viewing will be held on May 23, 2019 before the services at the church from 9:00-10:30 am. A second viewing will be held at The Church of Jesus Christ of Latter-Day Saints, 315 Main St, in Manassa, CO on Saturday May 25, 2019 from 11:00 am-12:30 pm. A graveside service will be held at 1:00 at the New Manassa Cemetery and interment will follow. Arrangements are being made with Serenity Funeral Home in Draper, UT and Rogers Family Mortuary in Alamosa, CO.

The family of James Albert Claunch created this Life Tributes page to make it easy to share your memories.