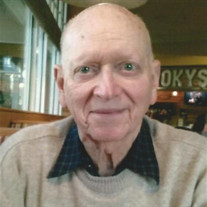 James Edward Crawford Born May 3, 1937 in Chicago, Illinois ~ Died December 30, 2019 in Farmington, Utah. James Edward Crawford was born to Don Alfred and Naomi Crawford in Chicago, Illinois. Jim grew up going to school in North Lake, Illinois with his parents, brother, and sister. Throughout his life he lived in Illinois, Maryland, Ohio, Pennsylvania, Idaho, and Utah. He joined the US Air Force in 1958 as an Electrical Draftsman and was honorably discharged in 1962. He met Linda Lou Holt in 1961 and they married on June 19 th , 1965. His brother, Rick, shared the Book of Mormon with Jim. After reading it, Jim prayed, and “I knew I would be forgiven if I joined this people.” He was then baptized a member of the Church of Jesus Christ of Latter-Day Saints in 1967. He and Linda were sealed in the Salt Lake Temple in 1969. Together they had 8 children, 6 girls and 2 boys. He started out as an electrical draftsman. In that profession, he gained many certificates through continuing education. Later, this experience brought him into Procurement Engineering for many years. He was also a professor at Lakeland Community College. In 1972 he was sealed to his parents, Don and Naomi Crawford and his siblings, Beverly and Richard Crawford. Hobbies included traveling with his family every year while growing up and he especially loved camping and being outdoors. He wrote many short stories accompanied by his drawings for years. Some of his church callings were Bishop, serving in the Bishopric, Young Men’s Organization, Cub/Boy Scout Master (one of his favorite callings) and Seminary Teacher. His sweet wife Linda passed away in 2002. A year and a half later, he met Vickie Lyn Henrie and they married in the St. George Temple on November 29, 2003. They enjoyed ice cream (anything chocolate for Jim) and gardening together. He is survived by his wife, Vickie Lyn Crawford. Jim and Linda’s kids: Laura (Jeff) Alexander, Paul (Rachel) Crawford, Leslie Crawford, Lisa (Daniel) Blanchard, Linette Crawford, Phillip Crawford, Larkin Crawford and Emily Crawford. Also, Vickie’s kids: Lorraine (Benjamin) Roach, Diane (Haldon) Johnson, and Doug (Angela) Burningham. His siblings: Beverly Crawford and Richard (Janet) Crawford. In addition to his 26 amazing grandchildren. He was preceded in death by his parents, Don Alfred and Naomi Crawford, his first wife Linda Lou Holt Crawford, and Vickie’s son, Joseph Glen Burningham. Thank you to his sweet wife, Vickie (Family Assistants ~ Diane and Larkin) and to all the nurses and workers with Envision Home, Health and Hospice. They took exceptional care of Jim in the final years of his life. A viewing will be held Thursday, January 2, 2020 from 10:00 a.m. to 11:45 a.m. Funeral Service will follow at 12:00 p.m. at the Canyon View Ward, 850 North Compton Road, Farmington, Utah 84025. Interment and Military Honors will be on Friday, January 3, 2020 at 1:00 p.m. at the Hurricane Cemetery, 255 East 600 North, Hurricane, Utah 84737.

The family of James Edward Crawford created this Life Tributes page to make it easy to share your memories.