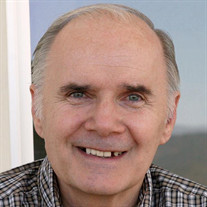 James Marlyn Jones, (aka: Jim and Marlyn), age 79, passed peacefully at Golden Living, on November 26, 2015 (Thanksgiving Day) from complications of cancer. Born October 9, 1936, in Draper, UT to James Alton and Wanda Gifford Jones. He grew up in Salt Lake City and graduated from Granite High School. A proud and honorable Veteran, James served for two years in the U.S. Army, Ft. Carson, CO. He married his sweetheart, Carol Ann Wilkey, May 8, 1959, and later solemnized in the Salt Lake City Temple, May 8, 1960. James was a hard-working, brilliant inventor, and worked full and part-time jobs, as a major appliance repairman—for more than 30 years—in order for his wife to be a stay-at-home mother to their four children. Jim and Carol designed and built their family home in East Midvale, where they lived for nearly 40 years. His greatest joy was his sweetheart, Carol, and his children. They loved their New Year’s Eve parties with friends; camping, fishing, floating the Green River; and Jim loved hunting duck, pheasant, rabbit, deer, and elk—which provided food for his family. Jim was a quiet, gentle giant who loved and revered nature and wildlife with deep respect, appreciation, and admiration. An admired teacher in the Boy Scouts program for his brilliant mind, skills, and passion for the outdoors. He loved Jazz music, and his favorite song was “Take Five” by Dave Brubeck. He would listen to his Jazz while tinkering around his garage shop—working on their vehicles and coming up with his latest inventions to make life at home more comfortable. Preceded in death by his parents, wife, and grandson, James Walter Miller. Survived by his children, Pamela A. (Gordon) Miller, Karen A. (Blake) Bowthorpe, Mark E. (Patricia) Jones, Darin B. Jones, seven grandchildren, one great-grandchild; siblings: Carol Jean Adams, Jacqué (Gary) Ballard, Etta May (Ellsworth) Johnson, Brent (Nelda) Eggett, Brenda Eggett (Janet); many nieces, nephews, and cousins. The family thanks the teams at Golden Living and Brighton Hospice for their quick, compassionate care; Karen Law, PA-C at the Blue Clinic, VA Medical Center; the staff at Friendship Manor; the staff at Guardian and Conservator; and Serenity Funeral Home. The family wishes to thank Nicholas III & Patti Gilbert for their generous contribution.

The family of James Marlyn Jones created this Life Tributes page to make it easy to share your memories.