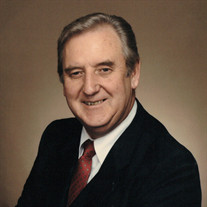 James Marshall was born April 10, 1932 at the Royal Maternity Hospital in Glasgow, Scotland to William Fulton and Rebecca Hardie Marshall. He was the oldest of three children. He spent many days in his childhood playing outside with his friends and often had his mom throw his wrapped-up lunch out the window rather than run upstairs to eat. He also enjoyed spending time with his Grandma and Aunt Nellie. James spent his teenage years exploring the towns and hiking the mountains near Glasgow. He would occasionally take his younger sister Jessica on his excursions with him. He had a deep commitment to country and served in the British Army where the furthest it ever took him was just outside the border of England. He served as a fireman once out of the army. When he was 22 years old, he immigrated to the USA. His parents and younger sister Jessica later joined him. He joined the United States Army and was honorably discharged in 1963. He remained in the US Air Force Reserves for a few years following his active military service. He was introduced to his wife Hudie Darlene Beynon by her sister Shirley. The two were married on December 31, 1958 in Salt Lake City, Utah creating an instant family with Hudie's two daughters Michele and Kathleen. They later had their sons William and Paul to complete their family. He, Hudie and their family lived in several places within the Salt Lake Valley over the years. In 1996 he and Hudie moved to Payson, Utah, where he resided until shortly before his death on June 18, 2017 in Salt Lake City, Utah. They were married for 55 years until her passing in 2014. James retired from the Union Pacific Railroad where he worked as a diesel mechanic. He was a member of the Church of Jesus Christ of Latter-Day Saints where he served in many callings. James loved anything to do with airplanes. He had many model airplanes and an airplane simulation computer game he enjoyed using. He was very enthusiastic about geneology. He loved to tell stories he knew of his ancestors. James is survived by his children Michele (Gordon), Kathleen (Reuben), Paul, daughter-in-law Cindy, sixteen grandchildren, twelve great-grandchildren and sister Jessica. James is preceded in death by his sweetheart Hudie, his parents, son William Marshall, granddaughter Heidi Beck and brother David Marshall. A viewing for James will be held Friday, June 23rd at Serenity Funeral Home in Draper from 6:00pm to 8:00pm. A graveside service will be held on Saturday, June 24 at 10:30am at Valley View Cemetery in West Valley City. It will be followed by a luncheon at the LDS Church on 3930 South 6000 West in West Valley City. The family would like to sincerely thank Paige Steele for caring for James and Hudie over the last decade, Shane Gilstrap, members of the West Mountain 4th Ward, and the many friends and neighbors of James and Hudie in Shady Oaks Trailer Park. We would also like to thank Horizon Hospice for their care of him and support for the family at the end.

James Marshall was born April 10, 1932 at the Royal Maternity Hospital in Glasgow, Scotland to William Fulton and Rebecca Hardie Marshall. He was the oldest of three children. He spent many days in his childhood playing outside with his friends... View Obituary & Service Information

The family of James Marshall created this Life Tributes page to make it easy to share your memories.