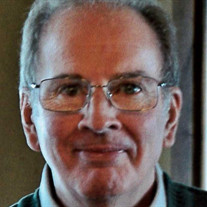 James Ernest Martin was born August 10, 1938 in Albuquerque, New Mexico to J. Wells and Ina Magny Martin. He grew up in Salt Lake City. He graduated from Granite High School in 1956. He attended the University of Utah and was an avid Ute fan. Go UTES!!! He was an active member of the Church of Jesus Christ of Latter-day Saints. He loved serving the people of Kentucky when he was a missionary in the East Central States Mission. He had many church callings and enjoyed being a Temple Ordinance worker in the Idaho Falls Temple, the St. George Temple, and until a few months ago a veil worker at the Jordan River Temple. He married Francis S. Shepherd on July 17, 1963. They had two children – Mary Ann Martin and Andrew James Martin. Later he married Patricia L. Havlicak on November 14, 1987. He became a dad to five other kids – Cynthia Havlicek, Lisa Ralphs (Brad), Jeffrey Havlicak, Randall Havlicak (Brenda), and Karina Carson (Scott). He brought joy into the lives of 21 grandchildren and 6 great-grandchildren. He was preceded in death by his father, mother, and his brother, Stanley Martin. He is survived by his wife, Patricia, and his sister, Alice Woodward (Richard). Jim was employed by B.F. Goodrich Tire Co., S&H Terminal Inc., Circle M Enterprises and he retired from Alpine Supply as a traveling Sales Rep. In retirement he worked his “dream” job at Wolf Creek Golf Resort in Mesquite, Nevada. He lived in Pocatello, Idaho from 2000 to 2005, moved to Mesquite, Nevada from 2005 to 2010, and then moved back to Salt Lake City. He enjoyed fishing, golfing, softball, basketball, and he was a long-time Utah Jazz fan. On Monday, Jim joined a group of his long-time grade school friends for a lively lunch. Funeral Services will be held Saturday, May 10, 2014 at 11:30 a.m. with a viewing prior at 10:00 a.m. at the Taylorsgrove LDS Chapel, 4845 South Woodhaven Drive, Taylorsville, UT. Graveside services will be held at Elysian Gardens Cemetery following services.

James Ernest Martin was born August 10, 1938 in Albuquerque, New Mexico to J. Wells and Ina Magny Martin. He grew up in Salt Lake City. He graduated from Granite High School in 1956. He attended the University of Utah and was an avid Ute... View Obituary & Service Information

The family of James Ernest Martin created this Life Tributes page to make it easy to share your memories.